Military deception in the form of song and dance 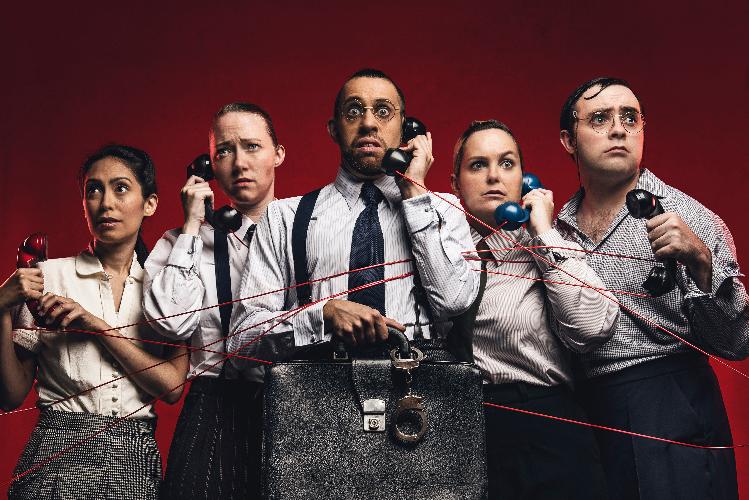 If someone somewhere were to pitch you a musical based on the deceptive exploits of  MI5 officers in 1943 that in part led to the changing of the tides of the Second World War,  you might be right to say, 'wouldn’t that work better as a film starring Colin Firth?' I would have agreed, but after experiencing SplitLip’s debut production, I can safely say sod the  Oscar winner (apologies Colin) and deliver me all that musical theatre goodness!

So yes, this is a musical about a military operation that involved floating the corpse of a  pretend British Officer, Major William Martin, off the coast of Spain. Complete with a  briefcase containing personal effects and more importantly, correspondence that suggested the allied forces were planning to invade Greece and Sardinia instead of the true target, Sicily. Operation Mincemeat tells the story from the point of view of those hatching the plan. Once again, you might think that this may be a very heavy and sinister production but once again, you’d be wrong. Despite the serious plot, this piece is simply joyous.

The team at SplitLip have crafted a gleeful and heartwarming that pays homage to both classic and modern musicals. It is packed with well-tuned reoccurring gags involving newts and James Bond (Ian Fleming was part of the team) and catchy numbers, all powered by one of the hardest working casts in London right now. Between the five of them, they tell the absorbing story all whilst performing as MI5 officers, typists, coroners,  bar staff, submarine crews, American pilots, and fabulous dancing nazis, to name but a  few. The decision to cast gender-blind adds to the charm and leaves plenty of room for the cartoonish and humorous elements in many of the characters to flourish.

The unexpected heart and soul of the show emerges towards the end of act 1 through  Jak Malone as Hester Leggett when he delivers the most heartbreaking number where  Hester sings about William Martin’s fictional fiancé, followed by her own lost love. The melody and lyrics are tender and incredibly powerful, matched exquisitely with Malone’s

stellar voice and performance. Completing the cast are the wonderful Zoë Roberts and  Claire-Marie Hall who bring the rest of the humour and effervescence needed in this production. Roberts's facial expressions and eyebrow work are second to none and Hall makes a fantastic Jean Leslie, a typist who breaks barriers to become part of the mincemeat team. All five cast members work tirelessly, barely leaving the stage for the entire show and therefore form such a brilliant cohesive unit with no weak link.

enhance the intensity on stage. Helen Coyston’s costume design is effective in subtly boosting the differentiation between the plethora of characters and Donnacadh O’Brian has done amazing work with the direction ensuring that the pace of the piece never stumbles and all whilst getting the best out of the cracking cast.

This show does a really good job of managing macabre humour in a mostly cheerful musical setting but as the show progressed, I began to feel that it strayed too close to the line of feeling like a parody musical that was reusing songs from existing shows. A few too many times it felt like I was hearing a stripped back version of a song from Hamilton,  Six or Amélie with the lyrics altered. Whilst it is perfectly normal to take inspiration from what came before, overdoing it means that this production struggles with its own musical identity. This show is capable of holding its own in the London theatre scene so let it be its own thing.

It cannot be understated how much potential this show has and you can now add me to the list of people calling for a West End transfer. It would be incredible to see this piece with a budget and production value to match its energy and heart, and more importantly to give as many people the opportunity to catch this fantastic show for themselves. But for now, get yourselves over to the Riverside Studios to see this wonderful new musical I  cannot recommend it enough.

It runs until 9 July.