Alright Bitches! - Review - Above the Stag 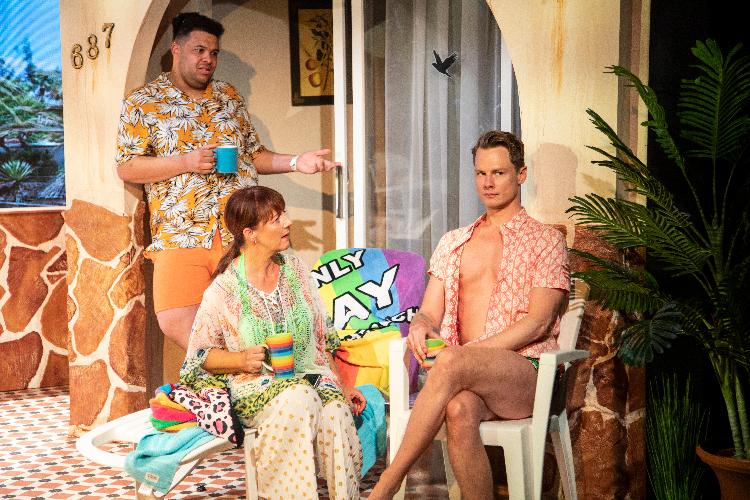 Alright Bitches!, the debut gay holiday comedy from Martin Blackburn, returns to the Above the Stag theatre after a successful run in 2016, directed by Bryan Hodgson.

Ollie (Marcus J Foreman) has decided to go to Gran Canaria with his partner Jason (Wilson Armour) to celebrate their one year anniversary. For those who don’t know, Playa del Ingles in Gran Canaria is one of the most popular gay destinations in Europe. The main area for the gay scene is the Yumbo Centre, a leisure and shopping centre with over 200 shops, restaurants and bars and clubs. In other words, the centre is just an uncomfortable 1970's type concrete jungle, a multi-storey claustrophobic tourist trap.

Probably not the best destination if you are looking for a relaxing getaway, but Ollie is very excited about his choice – probably more than Jason.

The couple has an apartment next to friends Max (Josiah Eloi), a stereotypical sarcastic gay man and Garth (Daniel Breakwell) and friend Pam (Jackie Pulford) who is trying to see how many straight men she can find in a gay town.

What follows is a ride of alcohol, gay jokes and activities and inflatable bananas. What can go wrong? Ehm, pretty much everything…

Marcus J Foreman and Wilson Armour bring perfectly on the stage the differences between the two characters: Jason is older, and his idea of a break is a cultural trip to Venice, while Ollie is younger and his idea of escape is a gay package holiday where most of the fun happens at night.

The plot is thin and the tone is light: but the sharp dialogues and the (camp) jokes keep the audience entertained.

Alright Bitches is a funny and witty comedy, and believe me, it’s more fun than going to Playa Del Ingles!