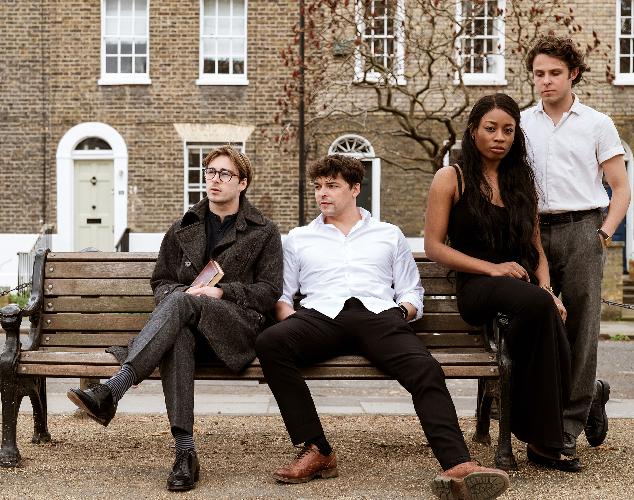 Preceding all of his dramatic output, Harold Pinter’s first significant literary creation was a novel written in the early 1950s. The Dwarfs wasn’t actually published until forty years later though the writer had reinvented it as a radio play in the early Sixties. Kerry Lee Crabbe’s adaptation (last seen at The Tricycle in 2003) is now revived at The White bear in Kennington in a spare and compelling production directed by long-standing Pinter connoisseur Harry Burton.

Set in post-war Hackney, it’s an examination of male friendship played out by three young men all of whom might seem to be facets of Pinter himself. There’s Len (Ossian Perret), an edgily nervy individual who may be on the spectrum. He can recite bus timetables, flirts with mathematics, attempts to play the recorder (badly), makes a joke of his Jewish heritage and tries his hand at writing. The stumbling narrative he is attempting to construct contains the titular characters who also stand as symbols of his two associates. Mark (Charlie MacGechan) is a sometimes actor with a line in dead pan repartee and an eye for the ladies. Pete (Joseph Potter) works in the garment trade and has anger management issues especially when he takes up with teacher Virginia (Denise Laniyan) who he then goes on to systematically abuse and degrade in front of the others. As in some of Pinter’s later work (cf especially Ruth in The Homecoming) it is she that holds the balance of power and her involvement with the trio eventually shatters their friendship. I was reminded of the dynamic of Yasmina Reza’s Art.

This drama is an appealing curio rather than a great play. The characters rattle around the east end of London, socialising,  intellectualising, discussing art and politics, bound together by previous ties but engaged in a perpetual power struggle even as they profess devotion to each other. However, although it has some interesting things to say about masculinity, its main significance lies principally in the pre-echoes it contains of Pinter’s later concerns. I’m no Pinter expert (though I have seen nearly all of his subsequent work) but I found myself readily identifying snatches of The Lover, The Caretaker, Betrayal et al.

The performances are universally excellent and, in the small space which is the White Bear, every gesture and nuance speaks volumes. Lanyian, in her professional debut, oozes icy control, MacGechan gradually reveals his character’s hidden depths and Perret elicits both laughter and sympathy as he acts as a buffer between his two more volatile friends. Absolutely mesmerising, however, is Potter’s stunning performance of compelling intensity, raw anger and edge of the seat anticipation which lights up the whole play. Ever since seeing him online in the, to my mind, most outstanding lockdown performance as Sasha in Philip Ridley’s The Poltergeist, I’ve been waiting to see what this actor can do in a live situation. I wasn’t disappointed. I repeat, I haven’t been this enthused by a young actor since I saw Ben Wishaw play Hamlet; I predict great things.

The Dwarfs plays until 5th June at The White Bear in Kennington.