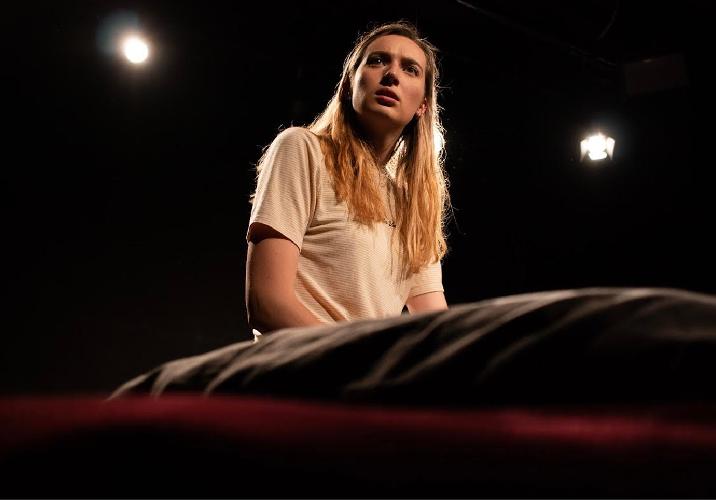 Hannah Baker brings a charming innocence and endless curiosity for the world around her to the stage of the Lion & Unicorn Theatre. In her one-woman show Banter Jar, she is Hannah – or at least a somewhat characterised version of her younger self. Together with her best friend Rachel, she experiences what it is like to grow up in Coventry. From her first kiss to finding a boyfriend, throwing a house party, losing her virginity, and being faced with mental health problems, Banter Jar covers every experience a normal 18-year-old would have and more.

Hannah’s single mum is hardly in the picture as she works a lot, trying to provide for the both of them. And so, it is just Hannah who is put in front of unusual challenges such as her best friend’s sexuality and alarming self-doubt which manifest in deep cuts on her shoulders, as well as her boyfriend Ezekiel’s recurring psychosis in which he turns into a violent person called Tom. Amidst that is the show’s protagonist who wants nothing more than to help the people she loves – simply by loving them.

Baker’s self-written show is a beautiful depiction of the helplessness that comes with seeing loved ones struggle with their mental health. Her portrayal of an independent but ignorant young adult is nothing less than relatable. With a lovely charm and youthful innocence, she allows us to see the world through her character’s eyes as she steers us away from judgement toward pure and raw feelings.

There is never a moment in which director Chris Larner allows us to detach from the story or from what is going on in Hannah’s life. Everything that she is feeling, we are feeling. And every question she asks, we can’t help but ask too. And even though, her childlike giggle borders on repetitiveness as she escapes dark moments with jokiness and humour, it never feels out of place.

Even though her over-characterised portrayal could be that of a 13-year-old, it allows for a refreshingly naïve look at challenging topics such as bipolar disorder and depression. Accompanied by her guitar, which she picks up occasionally to busk her way through the summer, Hannah Baker’s Banter Jar can almost be described as a beautiful experience. Beautiful – whilst engaging with an incredibly meaningful subject matter without any judgement or stigma but with pure love.