“If done with care, reminiscing is harmless” 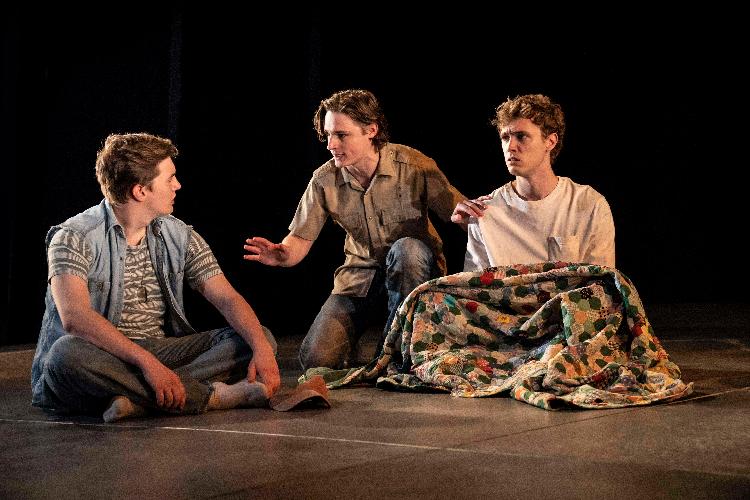 There is an undeniably strong bond between siblings and Naomi Wallace’s latest play asks how far that bond can be pushed and strained in the face of adversity. Nestled in a  half-remembered city in 1970s America are Jude and her younger brother, Acton.  Following the loss of their father and the absent nature of their hard-working mother, Jude  has been left as head of the household, tasked with protecting her impressionable sibling.  Acton finds protection at school through two new friends, Hoke and Frayne, but in an effort to prove their loyalty to one another trouble and damage ensue.

Wallace’s play is split in two, simultaneously showing the 1977 and the 1991 versions of the characters when they reunite under testing circumstances and reminisce about their past. This division is used to fine effect as truths unravel and relationships mutate.

From the first beat, Sharron Tarbet is formidable as Jude. She wields control over every scene she is present for and effortlessly carries the terrific range of emotions that Jude experiences - a complete and wholly convincing performance. Tarbet is at her best when paired with Stanley Morgan as her vulnerable brother, Acton. Morgan makes a truly impressive professional stage debut by delivering the sensitive and unsettled nature of  Acton flawlessly. The duo thrives off each other’s energy, particularly at the end of act one,  during a rather distressing scene - each actor handling the more than challenging subject with grace. 1991’s Jude, Jasmine Blackborrow is equally impressive as her younger counterpart and bears the weight of the character’s past subtly and confidently. The rest of the cast are also exciting to watch, each more than capable of capturing the intensity of scenes and holding the tension throughout.

The piece is set on a sparse concrete style arena (design by Naomi Dawson), that ensures the top-notch performances are the true focus throughout the play and is therefore flexible when it comes to setting. This combined with striking lighting design and smooth transitions from Rick Fisher as well as understated sound design from Tingying Dong  makes for a highly tense and captivating production.

The Breach weaves through harrowing topics at a relentless pace and therefore it would feel odd to describe this as an enjoyable production to go and see. There were moments where I was horrified about the conversations the characters were having and it is a true testament to the company that it felt truly authentic. This production does not hold back.

Sadly there were elements of this play that felt half-baked. The ending springs up unexpectedly and leaves too many questions unanswered as if a scene or two had been cut whilst simultaneously feeling as if the runtime could be reduced slightly to make this a  more impactful piece - act two felt incredibly short and the interval, therefore, felt slightly redundant. There was a real risk that the play would become overly static, and at times it did succumb but on the whole Sarah Frankcom's directing keeps the piece agile and progressing forwards.

Wallace's play toys with the ever-changing current of power and opportunity amongst a  group of friends and does so impressively in dark and horrific ways. This is not fun theatre but instead testing and challenging theatre that is highly entertaining to witness. There are a few issues in the structure of the piece, but the impeccable cast more than makes up for this. If you enjoy productions that shock and test your viewpoints, I cannot recommend this enough. It is not one for the faint-hearted.