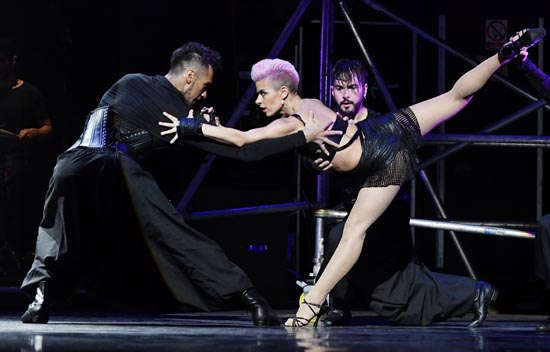 Germán Cornejo is back in London with his dance company, this time with a new show called Wild Tango. He celebrated the premiere with his own piece “Immortal Tango“ at the Sadler’s Wells Theatre in 2016 and since then we have seen him in Tango after Dark (2018) and Tango Fire (2019).

The new show wants to celebrate Argentine culture and explore the origins of tango, its complexity and its strength: but it doesn't. Tango is more than a dance: it is music and poetry that originated in Buenos Aires at the turn of the century, developing in the melting pot of cultures that was Buenos Aires – at that time a very poor city. Tango is passion. Tango means passion.

The cast, 10 men and three girls, includes several world tango champions, who give an explosive performance by mixing tango, contemporary dance, urban, malambo, and circus elements.  The music is a fusion soundtrack of Argentine tango, folk, pop and rock, even electronic tango. It is played by a brilliant band, with Luciano Bassi singing some of the songs with a beautiful voice and charisma. But I wondered if I was watching a tango show or a rock/pop concert until the end.

Every dancer shows great energy, and impeccable moves: it is impossible not to be impressed by the perfection and the speed of the movements on the stage. But a show can be technically perfect, and at the same time lack passion, chemistry drama and heart.

Wild Tango is more actual, inclusive and fluid than the previous productions of the company. The fusion of styles results in a dynamic show but the overall impression is that the numbers are disjointed, which makes it more difficult for the audience to connect with what is happening on stage. Still, Wild Tango is a fun night out that will be enjoyed by tango lovers and neophytes.