Til Death Do Us Part - Review -Theatre503

A moving and emotional portrayal of a family in grief 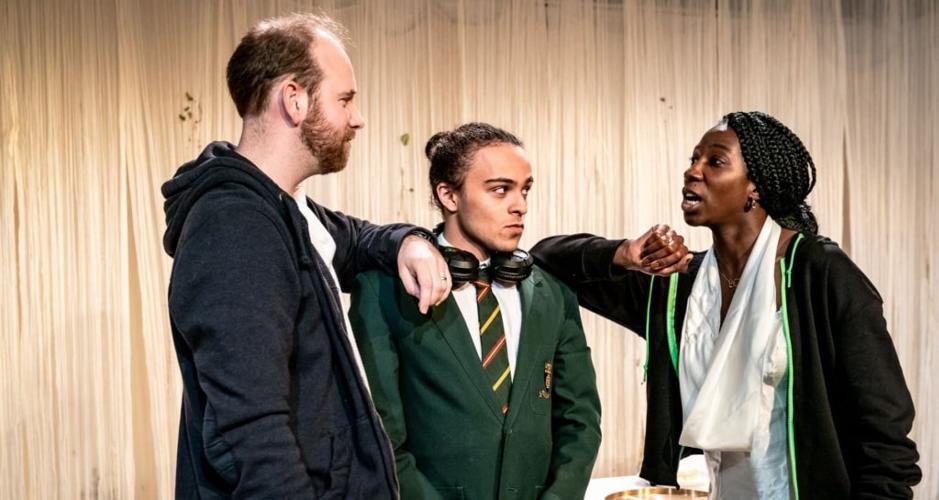 Safaa Benson-Effiom's debut play, Til Death Do Us Part, details the crushing grief and inevitable spiral of a couple amid the loss of their son. The aptly named piece conveys the heavy message with sensitivity, and the script is crafted with thought.

Beginning with a haunting sequence set to atmospheric tones, a series of movements weave together one side of the narrative. Receiving countless phone calls and bouquets of flowers, Sylvia (Danielle Kassaraté), and Daniel (Richard Holt), move about the intimate stage without a word spoken. Soon, this silence from dialogue is broken as the charismatic and smart teenager, Andrew (Jude Chinchen), appears, allowing an introduction to the family dynamics to be established.

Holding a seemingly secure and happy relationship with one another, the three of them laugh and joke, generating often comedic memories that remain once they can no longer be made. This follows a shift from the lightheartedness, to the contrasting emotional depth of the shattered couple without their child, feeling torn apart, and seeking a place to lay blame. Each potential mistake is highlighted in their reflections, which are entwined with flickers of their past life as a family unit.

The set, designed by Emeline Beroud, consists of some ivory drapes with flowers embedded, to create a beautiful backdrop, with a table centre stage to house many intense conversations, as well as the tender and loving ones. Furthermore, the lighting by Chris McDonnell is valuable in the storytelling by adding effect to the changing timeframes and warmth of the situation.

While the lack of progression in the narrative strives to mirror that of lasting devastation, particularly after the death of a child, it does result in a repetitive nature of arguments that seem to keep circling as they explore their future, now that everything has changed. All three cast members show particular brilliance while becoming their given characters, and embody their personalities well.

Til Death Do Us Part, produced by Darcy Dobson and directed by Justina Kehinde, is an emotive piece that brings to light difficult themes yet leaves the audience feeling as if they have been part of the show. It questions the reactions of humanity when faced with crisis, and the support in which we can offer others in need.