Let the sunshine in.. 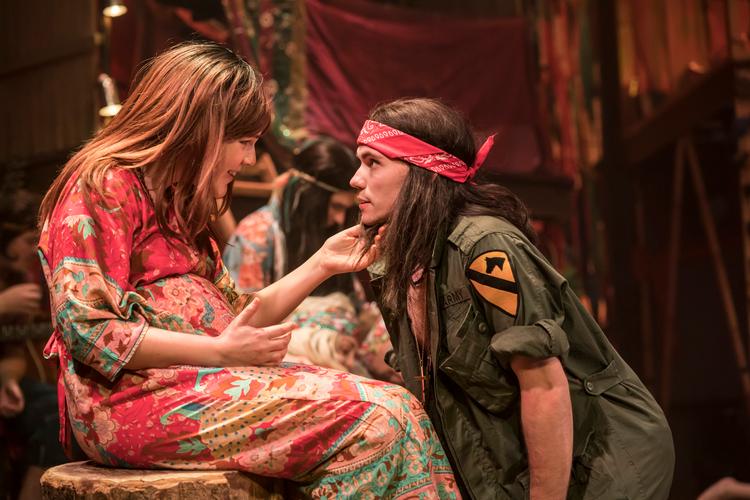 You could say Hair depicts that the world has come 'full circle' since its first staging 50 years ago. This is true to a certain extent; the younger generation still rebel, often demonstrating the 'hippy life' ideology in more practical, less violent ways; war still looms in a threatening grey cloud above everyone's heads; and sexuality and gender are more fluid now than ever before. However, this anniversary production at the gorgeous New Wimbledon Theatre, despite its palpable energy, never ventures particularly deeply or decidedly into one message.

Maeve Black's vibrant set, featuring ribbons hanging from the ceiling and colourfully striped trees, efficiently creates the idea of a peaceful commune where sex is dished out on a 'want to?' basis, drugs are consumed like sweets and protests are planned. The band are also slotted nicely into the crevices of the set and do an admirable job at building a 'trippy' atmosphere.

The main problem with Hair is also its greatest asset - unrelenting energy. With a total song count of 47 numbers in two acts - each a full scale choreographed scene, multi-role and multi-costume - after a while it all just gets a bit much. The audience are never allowed time to breathe and process, let alone the actors, who maintain inordinate exuberance over the show's 2.5 hour run-time.

The cast are, for the most part, excellent. X Factor star Marcus Collins shows he's more than just a stunt casting by delivering some of the show's most hilarious moments. Alison Arnopp as Jeanie, Tom Bales as Margaret Mead and Aiesha Pease as Dionne also deserve particular mention for their stunning vocals and stage presence.

The choreography was also repetitive, with a lot of central circles and a hell of a lot of chest rubbing.

Although the show is performed as it is originally intended, a lot of cutting needs to be done, with the same sentiments repeated several times across the sheer volume of similar-sounding music. Having said this, when a song hits, it goes down incredibly well. Like life affirming song I Got Life and the show's notorious number Let the Sunshine In which brings members of the audience up onto stage to groove with the cast.

The show's infamous nakedness - which involves the whole cast stripping down to their birthday suits - is classily dimmed and hidden at the back of the stage at the end of the first act. Despite being somewhat unnecessary, it is a bold selling point and fun to see boundaries being pushed, just as the protestors back in the 1960's would have wanted.

Nothing really sticks about the show. The characters are wholly forgettable, the songs all blur into one loud, slightly obnoxious cacophony and the script really ignores the potential for comedy - instead focusing on spreading cheeks more than spreading messages.

By no means should Hair, with its zany style - at the time thought to be 'revolutionary' - be forgotten. Instead this production screams out to be reworked, cut in half, and reworked again. After all, hippies are all for change.