The End of the Night - Review - Park Theatre 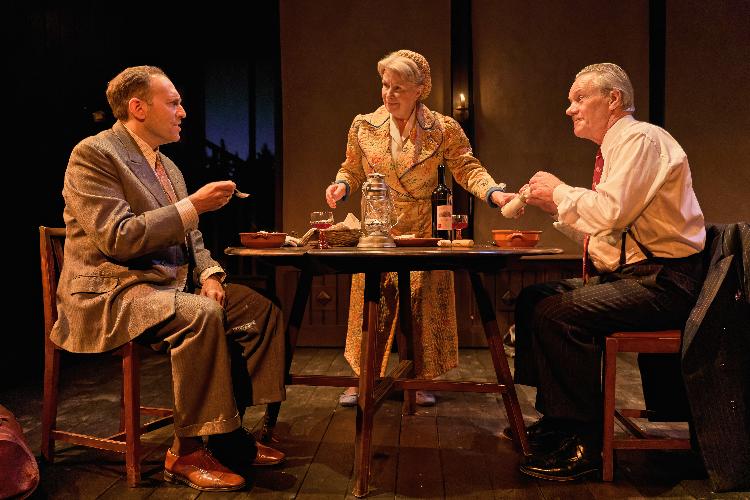 What happened to the Jewish people in concentration camps in the days before and after Hitler’s fall? Ben Brown’s The End of the Night engages with that question. In secret, Norbert Masur (Ben Caplan), a member of the World Jewish Congress travels to Nazi Germany to meet the man who has the power to impact the war: Heinrich Himmler (Richard Clothier). Joining Himmler’s physiotherapist Felix Kersten (Michael Lumsden) on his private estate Hartzwalde, the two men prepare for a meeting which could save thousands of Jewish lives.

We are eased into the show through an opening monologue from Caplan. He enters the stage, takes a seat, and slowly sets the scene of Berlin under attack in 1945. Stillness is a quality that runs through the rest of the show. Calm, soft-spoken dialogues stand in stark contrast to the bombing sounds chosen as background noise by sound designer Gregory Clarke. Even though drastic decisions are made, and crucial topics discussed, The End of the Night never loses its steadfast pace under Alan Strachan’s direction.

Candles dip the hidden estate into warm light as the three characters seek shelter from the bombings happening in nearby Berlin. Joining them is housekeeper Elisabeth (Audrey Palmer) whose presence can only be described as purposeless. Occasionally appearing with a tray of coffee and pastries as she begs Kersten to ensure her safe travels adds little to none to the male-dominated play.

Neither does Jeanne Bommezjin’s appearance (Olivia Bernstone) – a Jewish woman who recounts her rescue from Ravensbrück concentration camp following Himmler’s orders. Just as the play comes to an end with a closing monologue from Caplan, she steps forward to deliver a first-person account of her rescue. Even though she is the embodiment of everything that has been achieved that night, her late introduction and all-too-familiar story fail to add anything of value.

Thankfully, it is altogether not hard to imagine the circumstances under which the meeting took place. Michael Pavelka’s carefully selected wooden furniture, an antique radio, and appropriately dressed stage flats take us back to the second world war. Even though the severity of the situation never finds its way into the actors’ delivery, the three men perform an engaging portrayal of opposing views trying to find common ground. As a driving force serves the question of whether Kersten and Masur are going to succeed in saving Jewish lives, as well as what motifs led Kersten to organise the confrontation in the first place.

The End of the Night depicts an important moment in history and achieves to do so by merging an engaging delivery from the performers with quintessential cultural memory.