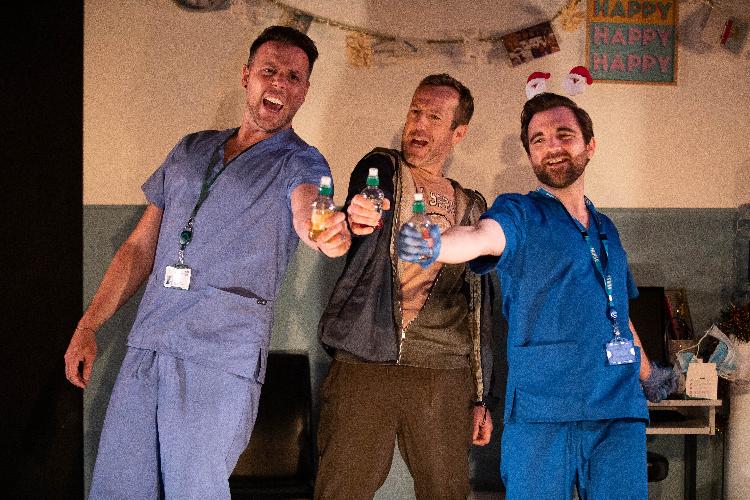 Puccini’s romantically tragic opera, La Boheme, has had many adaptations and modernisations over the years since its creation, most notably with Jonathan Larson’s Rent. The King’s Head Theatre have a brand-new iteration of the heart-breaking tale, paired with much of Puccini’s original score, and a new English libretto by David Eaton and Philip Lee.

This revitalised production of La Boheme is a fresh story, entirely relevant for a modern audience, bringing an LGBTQ+ relationship to the forefront of opera, without being political in nature. The customary story points from the original source material are all there, however, this retelling brings with it a captivating love story that gives its audience a desire that this La Boheme will end in a different way from its previous iterations.

With a very strong cast of four, the reduced Puccini score worked exceedingly well with the beautiful operatic voices of Matt Kellett as Marcus, Grace Nyandoro as Marissa, Daniel Koek as Robin, and Philip Lee as Mimi. The four performers showed great chemistry together and immediately put the audience at ease with their captivating storytelling. The use of comedy, particularly in the first act, helped establish the playful relationship between Robin and Mimi. The comic timing of Nyandoro and Kellett worked superbly together during the second act and Puccini’s iconic Musetta’s Waltz.

There was only a slight technical issue with this piece which was due to the sound. At several points in the evening, the music from the piano was especially loud and caused difficulty in hearing the clever libretto. In a venue the size of the King’s Head, this can easily be resolved by marginally reducing the volume of the piano.

That being said, this production of La Boheme is a stunning retelling of a timeless tale and is a beautiful example of how to introduce a modern audience into the world of Opera.

La Boheme performs at The King’s Head Theatre until 28th May, with tickets here.