The Show In Which Hopefully Nothing Happens - Review - Unicorn Theatre

How boring theatre can be? 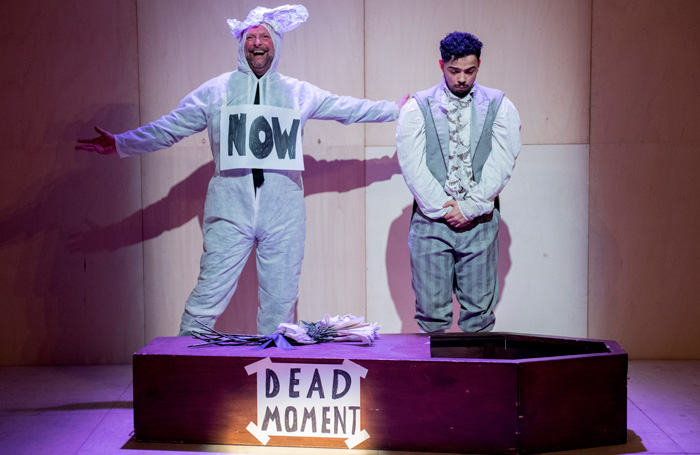 As we all know London is pretty much on full alert these days. However, I did find it a little worrying that there needed to be a glowering security guard standing in the foyer of children’s theatre the Unicorn. I had gone there to see the interestingly titled The Show In Which Hopefully Nothing Happens aimed at 6 – 12 year olds so his presence seemed a little over the top. As it turned out I needn’t have been concerned for security guard Nigel Barrett turned out to be the first of many surprises this joyfully gleeful show had to offer; it’s an absolute treat from start to finish.

Seemingly slow and tedious on the surface, the hour is stuffed with more challenging ideas than the average adult drama. The performer, Riad Richie, attempts to carry out his role while jobsworth security guard Nigel at first tries to prevent him and then finds himself sucked into proceedings. Soon he’s looking after a pet turtle, wearing bits of furniture on his back and a coffee pot on his head (don’t ask) and at one point he plays hide and seek with himself. Meanwhile Riad is having an existential crisis as he searches vainly for dramatic “moments” one of which is also portrayed by Nigel (again, don’t ask). We also get a piano keyboard which falls apart, a mysteriously balanced pot plant, power tools, trickery with lights and sound and a procession of small paper mannequins. All of this is played out on an appropriately bare plywood covered stage in the clowning tradition at which the Europeans are so good.

The duo’s deadpan delivery and timing is spot on as the manic metatheatrics increasingly twist and turn and the young audience – loving every minute of it – join in trying to solve the conundrums with which they are presented. I too was captivated, finding it by turns intellectually stimulating and hilarious; I can’t help thinking that Samuel Beckett would definitely have approved.

It runs until 28 April