A new cast for the West End hit comedy 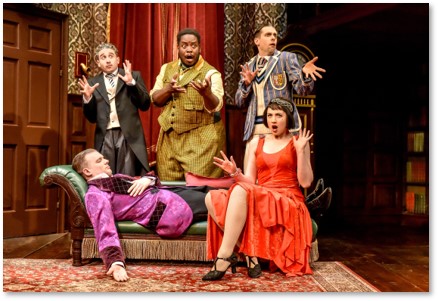 An evening of fun, laughter and even more fun, The Play that Goes Wrong never misses a beat.

The show follows the antics of the Cornley Polytechnic Drama Society, who are trying their very best to stage a production of a 1920s murder mystery. As the show's title might suggest, this is not as easy as it sounds with everything that can go wrong doing just that

The hit farce has been running on London stages since 2013 when it opened as ‘The Murder Before Christmas’ above a pub. Now, it garners audiences in the thousands as it continues to be the West End’s finest farce.

The new cast takes this legacy to new heights. With a troupe of eight actors, each one shines and perfectly compliments every company member. With fantastic comedic timing and flawless physicality, the cast keep the audience falling off their seats.

A special mention must go to each cast member. Tomisin Ajani who plays the disgruntled sound operator, Trevor, is there with the audience from the very beginning. Ajani engages from start to finish as his earnestness for his lost ‘Duran Duran’ CD sets the perfect tone for the evening. Jaouhar Ben Ayed who plays Dennis, sizzles with wit and never fails to miss a comedic beat. Ashh Blackwood who plays Annie (the doted stage manager) is cast perfectly as she impressively switches from the timid backstage crew member to the boisterous Florence Colleymoore. Anya De Villiers plays Sandra, the excitable and enthusiastic actress. De Villiers expertly glides with the momentum of the play from start to finish, keeping the audience hooked. Scott Hunter who plays a demure Max, masterfully uses physicality to bring each moment to life. Oliver Mott who plays Jonathan is crafty in his ability to entertain the audience with few words and dexterous physicality. Mikhail Sen who plays Chris, the understandably frustrated director, is at the heart of the show. Sen’s fantastic comedic skills bring every second on stage to life. Finally, Stuart Vincent who plays Robert is absolutely magnetic from start to finish.