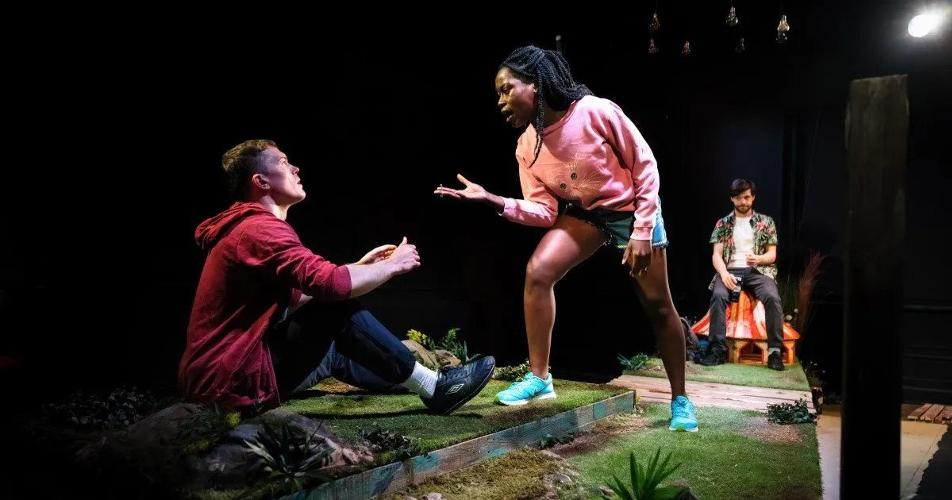 High up on a hill, three strangers meet. Two of them have been friends for many years whereas the third is an intruder, straining the bond between the two young men. She is James’ (Theo Ancient) new girlfriend Charlotte (Whitney Kehinde) whom he has brought home to meet the ghosts of his past – his mother as well as his best friend John (Jack Condon).

Looking down on the English coast, the two schoolfriends reunite and quickly become aware of their differences. James has made it out of their lower-class hometown, went to university and met the love of his life. Whereas, John, on the other hand, has achieved none of that. Getting drunk in his regular spot, looking at the big dipper and the world below, he is faced with the realisation that his life has not amounted to much, and James’ and Charlotte’s presence only reminds him of that.

Jack Condon’s If. Not. Destroyed. Still. True. is supported by a beautiful set and lighting design (Anna Kelsey and Gabriel Finn) which makes it easy to imagine that place high up on the hill, but things get dark very quickly. With every distanced reunion between the friends, John’s spiralling mental state becomes more and more apparent until suicide seems the only option. Leading up to it is a lack of communication and connection between the two friends.

It is hard to pinpoint whether that is due to Condon’s realistic writing, or a lack of chemistry between the actors. Quick exchanges and disjointed dialogue make the deep conversations feel shallow as if the actors fail to recognise pivotal moments. Phrases of encouragement become throwaway lines as the play grasps at gravitas. Even though everything that could possibly be said, is voiced by the actors, what really is needed in those cathartic moments is allowing the audience to feel it.

Underneath that, If. Not. Destroyed. Still. True., directed by Sarah Stacey, is a powerful depiction of the different ways in which mental health problems can manifest. It also serves as a reminder that we are all connected. Whether that is through friendship, upbringing, or comparable emotions. However, the actors keep circling around in a melodramatic portrayal of loss and desperation as they address stereotypically controversial topics to finally reach the realisation that we are all affected by each others’ actions.