What keeps you awake at night? 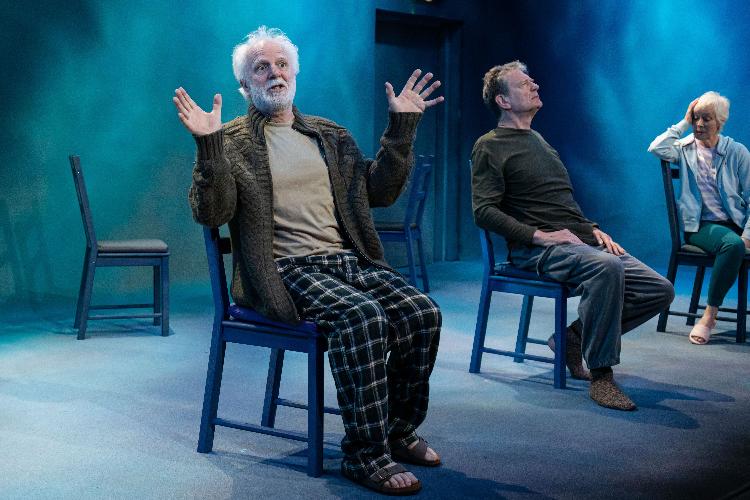 We’ve all been there, it's late and you can’t sleep. No matter what you do nothing can stop your mind from ticking away. We’ve tried the apps that help us visualise things or distract ourselves with a numbing activity, left powerless, longing for sleep to take us off.  The folk at ViSiBLE theatre have examined these moments for, you guessed it, five characters as they battle with insomnia. Devised over two years with a multitude of actors and creatives, they explore how to survive a lonely night whilst trying to find peace with your past.

Harvey is struggling to publish his political novel, Helen is reluctantly due to host a film screening, Terry agonises over the loss of her daughter, Bill questions where his life and career have gone and Hugo reminisces about past relationships both romantic and familial. Each is agitated by the choices and events that got them here and how long they have left to heal and find closure.

The cast performs in five interweaving monologues that chart the moments that brought them to this restless night and each is well cast and an excellent storyteller. They are a  delight to listen to and are highly convincing as their respective character. Sally Knyvette’s  comedic delivery is excellent as the ever so slightly bitter Helen and Geraldine Alexander pack an emotional punch when experiencing “nostalgia for a time when everything was  possible.”

Despite strong performances and a mostly strong script, there are elements that do not quite work. Firstly, the cast oddly alternates between talking in the first and the third person for no clear reasoning, meaning that the monologues feel overthought and clumsy.  Secondly, as the five monologues continue, there are subtle nods at connections between the characters, but it would have been great if that was hinted at a tiny bit more to create a more cohesive piece. The lack of cohesiveness means that the play is over-encumbered by plot and lags thanks to its five separate stories happening simultaneously. Lastly, for most of the performance, when they are not speaking, the actors are left in a sort of lacklustre limbo in the background, acting out their sleepless activities, leaning on the walls or lying on the floor. It is often quite distracting but also feels like the easy directing option.

Design from Agnes Treplin comes in the form of a sparse, dreamy space consisting of cloudy walls and a set of chairs that the actors move between. Neill Brinkworth utilises simple and subtle lighting to good effect, allowing the colours to shift as the piece progresses.

This production is a great example of storytelling, with five individually sound monologues but struggles as a complete piece. It bears some of the classic scars associated with devised theatre, where elements have been overcomplicated without purpose and therefore the result is muddied and feels incomplete. Such a shame when you have a  strong cast such as this combined with intriguing themes that are lesser seen on stage.