Nicola Walker stars in the new revival at the NT 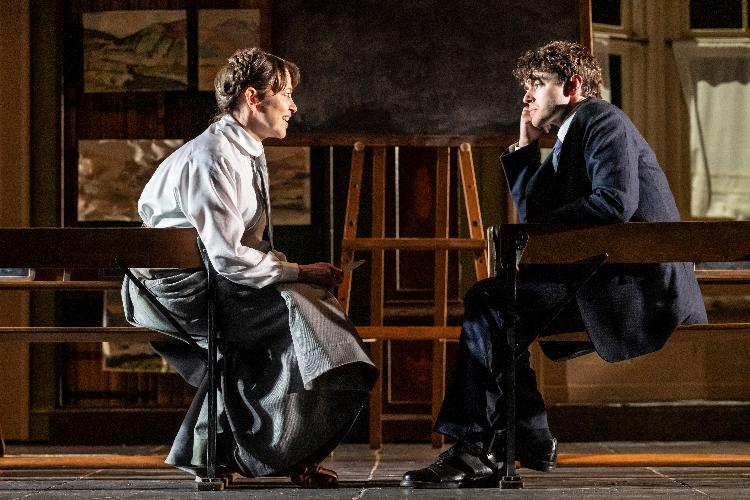 The National Theatre has revived Emlyn Williams' 1938 semi-autobiographical play about a poor, uneducated Welsh Miner whose life changes with the support of one determined teacher. A tale of social mobility, in spite of its illustrious and international production history, this inventive production installs the playwright as the narrator adding a metatheatrical lens through which we watch the evening's events unfold.

From the top, the audience is swept away to another time, another place. They are in the safe hands of Dominic Cooke, a director who knows well that theatre shines brightest when it does what it, alone, can do.

The play’s action boldly begins on a barren stage leaving much up to the imagination of its audience and the specificity of its actors. The gamble pays off with shocking effectiveness. In Charles Balfour’s quiet lighting, uniquely designed and daring enough to play in the dark, we enter a world of theatrical suspension. Our narrator, played brilliantly by Gareth David-Lloyd, deftly guides us into the story and as we traffic deeper, leaves us more and more to our own devices. As the evening unfolds, Lloyd’s role as both onlooker and orchestrator reveals what captivating presence can be achieved in stillness through listening.

Though the production runs 2 hours and 40 minutes, the show never drags on. It is well-paced and the command of language demonstrated by the company is extraordinary. Nicola Walker in particular handles the text with admirable speed and clarity. Wisely, this production is underscored by Will Stuart’s angelic choir of Welsh Miners. A constant reminder of not only the play’s context but the potential futility of its action at hand. The harmonies, which are sung so gorgeously by the Miners, hook into the audience who remain all the more engaged and propelled by their song.

The actors on display in this production are phenomenal talents. The show is the better for their nimbleness and instinct toward the comedic and unsentimental. In particular, Alice Orr-Ewing and Rufus Wright offer some of the evening’s best laughs with whip-smart delivery. Nicola Walker is completely alive and moment to moment onstage. Iwan Davies as Morgan Evans transforms before our very eyes and his final twenty minutes onstage leave the audience with no doubt that they are witnessing the breakthrough of a star.

Ultimately this show is a tender love letter to teachers. To that rare breed of selfless servants who invest their lives in the potential of their pupils. A testament to the power of reading, knowledge, learning, and love: The Corn is Green enjoys a perfect revival for our generation. Do not miss it.