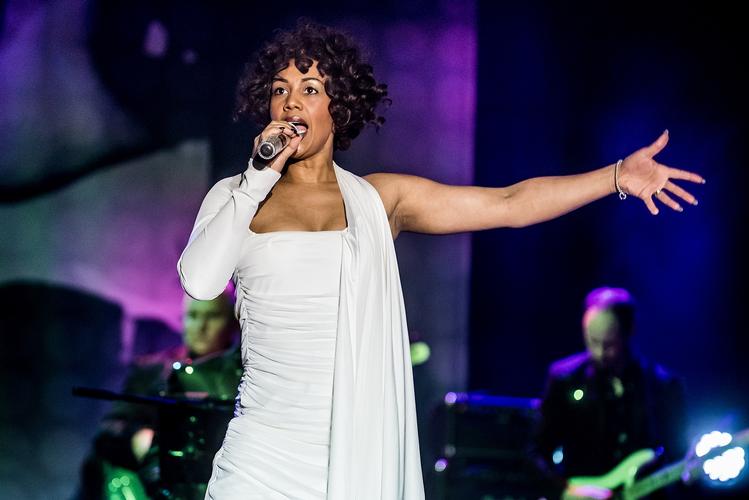 It was a very warm welcome for Elesha Paul Moses and the tribute concert Whitney – Queen of the night at the Savoy Theatre – the first of the three West End dates announced. The concert celebrates the highlights of Whitney Houston's career through her most successful songs.

It takes the audience – mostly Whitney's fans of all ages - on a rollercoaster ride through three decades of classic hits that include I Wanna Dance With Somebody, One Moment In Time, I'm Every Woman, My Love is Your Love, So Emotional Baby, Run to You (a beautiful version piano/voice), Saving All My Love, I will Always Love You, the unforgettable When you Believe which Whitney recorded with Mariah Carey for the film The Prince of Egypt and many more. A real nostalgia fun party!

Even if Elesha Paul Moses is not trying to emulate the diva's voice - especially because Whitney Houston had a 'once-in-a-generation' voice- you have to remind yourself that it isn't actually Whitney singing. Isn't that amazing?

I also appreciate that the songs are based on Whitney's actual live performances rather than on the recorded versions.

Elesha is accompanied by three fabolous backing singers: I loved their dancing as well as their fantastic voices, which entertain the audience when Elesha changes her costumes (probably 10 times). The band, particularly the saxophonist, are also great and join in. The audience of the sold-out Savoy was on fire, with multiple standing ovations and plenty of audience participation.

The show ends with The Greatest Love of All, the best performance of the night (together with Run to you).

Whitney – Queen of the night is a fantastic evening, unmissable for all Whitney's fans.

The show will be back to the West End on Sunday June 2 and July 7. For more information: www.queenofthenight.co