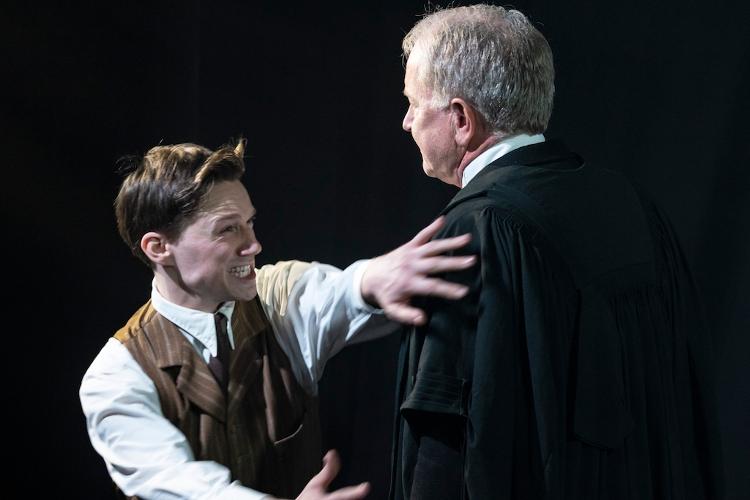 Having seen a version of this intellectually thrilling play in July 2021, I was intrigued to see what Glen Chandler would now be able to bring to the table in this new revised version taking place at Above the Stag Theatre.

Sidney Fox (by name and by nature) is a rent boy, a corn man with a love for defrauding innocent folk and devoted love for his mother, of whom he is later charged with her murder, circumstantially.  There are a lot of spoilers here and I am mindful not to give away the whole plot.  What I will say is that to this day it is one of the most controversial cases to be put to a Judge and Jury and is often referred back to in test cases.

Running at an hour and ten minutes, it is just meaty enough however it could have been developed further by incorporating other characters that are only mentioned.  It felt in this version that more humour has been added in, which was a nice addition, you cannot maintain such a serious dialogue without breaking it up.  The relationship between Fox and Rosaline was a point of focus and it is clear the characters were close, they were fairly open about their sex lives with Roasline stating at one point to Sidney ‘you were locked up with all those men in prison, I wish I was!’ Issues with class system and attitudes to homosexuality are highlighted with a touch of nuance - a police officer mentions to Rosaline that her son mixes with sodomites and she retorts ‘no, I told him we are from Norfolk!'

Sidney Fox’s Crime is a fascinating piece not least because it is a true story but because of the ability that Glen Chandler has breathing life into it.. Mark Curry brings a fresh perspective and the delightful duo of Amanda Bailey and Sebastian Calver are sublime to watch. Above the Stag is light and airy and the perfect complement to a somewhat dark piece of theatre. Bravo!

It runs until 7 May.