Saving Britney - Review - The Other Palace 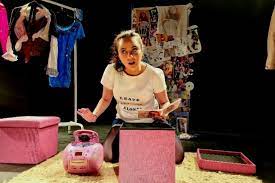 Anyone with even a passing knowledge of the ups and downs in the life of singer Britney Spears will be able to enjoy this one-woman show, while those of us who grew up in the nineties and noughties, singing along to her (sometimes irritatingly) catchy pop hits will have the added boost of a healthy dollop of nostalgia to carry us along.

Inspired by the #FreeBritney movement, “Saving Britney” is both a look at the Mississippi star’s journey to fame and then infamy, and an examination of a superfan’s experiences from childhood in the nineties to the present day.  Ambitious, certainly.  But it doesn’t quite delve far enough into either side of the story to be really satisfying.

Shereen Roushbaiani plays Jean, a girl so obsessed with Britney that she finds shoe-horned coincidences linking them together in the tiniest details – they share a birthday, for example, albeit eight years apart.  It is a spirited performance, grabbing the audience’s attention and goodwill straight away with her energy and self-deprecating humour.  There are moments of subtlety in the more delicately-played moments which were a joy to behold, but these were blotted out by occasional heavy-handedness in the script – being told early on that Jean’s mother died from cancer was handled with as much sophistication as Monty Python wielding a large fish.  There were musical moments between scenes where Jean dances and drinks, but these felt awkward and amateurish.  The main problem with the performance was highlighted by these moments, which was that Jean’s story is progressing forward in time from being 7 years old to her thirties, but the delivery remains rooted as that of a little girl with ADHD rather than maturing in tandem with the story.

On the Britney side, the details of her biography are presented to the audience by an American reporter equipped with yellow plastic microphone (also played by Roushbaiani).  There were some lovely touches here, such as the explanation of the singer’s bubble-gum pop voice, forced upon the teenager by a month’s intensive work being taught to strip the bass “and soul” from her sound.  But when it came to the breakdown and subsequent years, Spears was somehow left behind by the narrative – a footnote to the rest of the piece.

While it is easy to understand how Jean feels connected to the star by the pain hiding in her lyrics, linking Britney’s biography to Jean’s own experiences felt too on-the-nose at times – did Jean need to have her first kiss with a girl at the same exact moment that Britney and Madonna were locking lips on MTV?  And then the climax of the piece, the epiphany Jean experiences that she herself might be part of the problem, was rushed.  It would have been interesting to explore that more gradually as the show progressed, whereas here it felt almost tacked onto the end.

Overall, “Saving Britney” is an enjoyable show with a strong performer but a flawed script.  There is great promise here but the piece might benefit from further development in order to reach its full potential.