An Existential Comedy for the Age of Anxiety 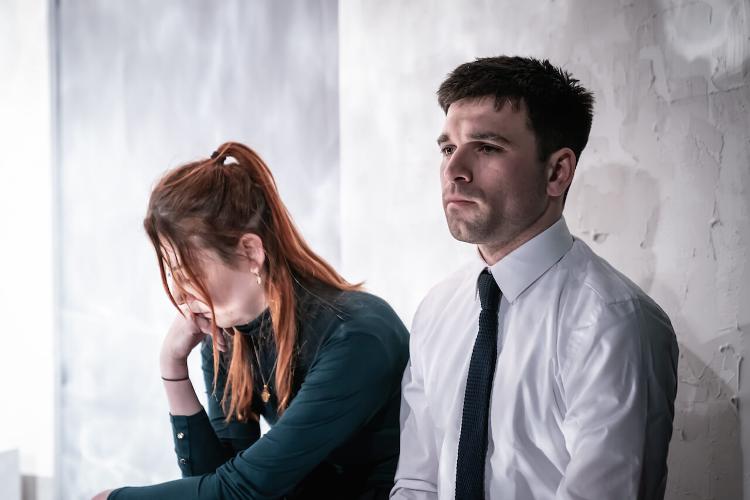 Dirty Hearts exposes and scrutinizes the "dirty games" human beings can play at each other's expense. The complexity of all relationships presents the central theme running throughout the performance. The conversations and events between the cast of four, bring into question our capacity for forgiveness,  capitalism, and morality asking the question as to whether or not it is possible to move on together if the couple agrees to "palimpsest"!.

Ben (Pierro Niel-Mee)  and Laura (Isabel Della-Porta) start the play by announcing to their friends Simon (John MacCormick) and Julienne (Allegra Marland) that they have decided to get back together after a six-month separation. Julienne's emotional eruption in the opening scene when the news is broken to her and Ben appears unfounded and shocking after all "good friends" want to only see the best for their friends, don't they?

Staged to a stark grey and white backdrop, the clinical styled setting is certainly no reflection of the relationships and emotional rollercoaster that the two couples embark upon. After all, art reflects life and relationships are rarely "black and white".

Director Rupert Hands presents the audience with bite-size scenes revolving between the four
characters while moving back and forth between the timeline. Hands delivers the play's disjointed timeline with confidence and ease. Combined with the rapid pace of the performance, there's no time allowed for you to get lost or confused along the way. Each part of the storyline draws you in further and leaves you eagerly needing to know more.

Writer, Paul Murphy encapsulates the reality of many modern-day relationships. The play is tainted from the start by the underlying telltale signs of cheating and deception. The observation of using an adult's online search history to understand what "turns them on" combined with sending "dick pics"; and the manipulation games used to gain emotional and financial advantages sets the play firmly in the 2020s. Human Nature hasn't changed over the years, just the tools used to manipulate have adapted.

The play is extremely thought-provoking and emotionally triggering at times. Upon reflection, I wonder how many people will leave the theatre thinking about their behaviour in the workplace, how they conduct personal relationships and analysing their deeper moral compass.