The Hound Of The Baskervilles - Review (Online Streaming) 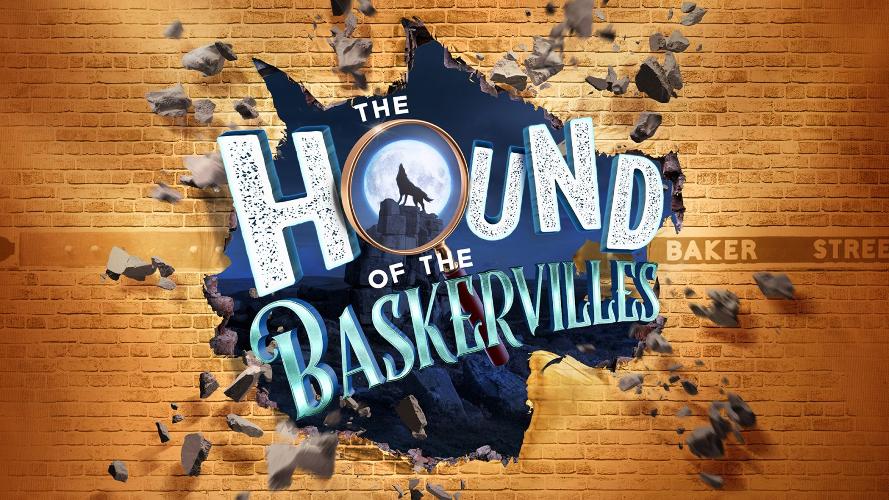 The Hound Of The Baskervilles, based on the famous story by Sir Arthur Conan Doyle, is a recording of a live performance given a couple of months ago which opts for farcical comedy rather than horror. It was originally performed by physical comedy experts Peepolykus. Surprisingly it is actually quite a faithful recreation of the original plot in which Holmes and Watson set out to discover the truth behind the ghostly apparition on Dartmoor and secure the existence of Sir Henry Baskerville whose life is threatened.

The tale is an oddity in the Conan Doyle canon in that Holmes himself disappears from the action for a prolonged period. Here it matters little as it means Jake Ferretti can also take on a series of other roles which are distinguished one from another by a procession of increasingly silly costumes, hair pieces and accents; he plays two the female roles. It is, of course, elementary therefore that Serena Manteghi confines herself to a series of male characters the best of which are her two – or is it three? – sack carrying local yokels who raise some of the biggest laughs in the piece. Largely confining himself to the character of Dr Watson, Niall Ransome has more of a straight man role and contains the over exuberance of the other pair that, at times, threatens to derail proceedings. The whole thing rattles along at a fearsome pace. This is nowhere more true than in the highlight of the show -  a extremely quickfire recap of Act One played at breakneck speed as the opener to Act Two.

There’s some inventive direction from Tim Jackson (based on Lotte Wakeham’s original) as even the stage furniture doubles and trebles furiously – one piece becomes Holmes’ desk, a hansom cab, a train carriage and the Baskerville fireplace. Further ingenuity occurs in the lighting and sound departments such that there’s no need for physical representations of creaking doors and windswept moors. A particularly good running gag where various characters start to sink into the boggy recesses of Grimpen Mire hits the spot every time and highlights the performers physical comedy skills as do the use of a couple of dummies which get their own bow in the curtain call.

A tongue in cheek literary adaptation with just three performers specialising in a good deal of physical comedy, quick-change routines and mime places it in much the same camp as The Thirty Nine Steps and Jeeves And Wooster in “Perfect Nonsense”. Like these, it is a good deal of fun but don’t necessarily expect anything startlingly original about the concept. If you’re a Conan Doyle purist you’ll probably want to give this a wide berth but if you enjoy a good chuckle and admire theatrical dexterity you’ll probably love it.

The Hound Of the Baskervilles is available on-demand from the Original Theatre Company’s website.