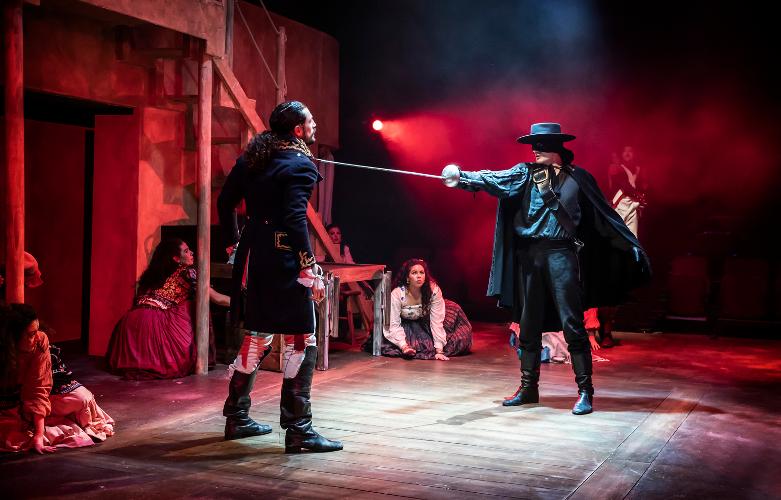 Katy Lipson and Aria Entertainment’s Zorro bursts into Charing Cross theatre, charring the new musical theatre competition in its wake. With music by The Gipsy Kings, book and lyrics by Stephen Clark, original story by Stephen Clark & Helen Edmundson, and co-composition and adaptation by John Cameron.

It’s certainly a mighty task to stage a story with so much grandeur. Christian Durham’s direction gives us frocks, frills, and ferocious action as Diego and his brother Ramon fight for power following the death of their father. With the help of Inez and her gipsy band, along with the timid courage of Sergeant Garcia, the love interest is won, and the bad guy defeated. Classic.

The production encompasses the one-size-fits-all actor: singing, dancing, instrument-playing, sword-fighting, Spanish-speaking extraordinaire. Despite some sketchy storytelling getting us through the exposition of the first 20 minutes, the story kicks into gear with impressive vocals from Paige Fenlon as Luisa. Matching this high level of talent is Benjamin Purkiss’ Diego - definitely a young tenor to watch.

The greatest storytelling comes from the dialogue and sharp wit of Marc Pickering’s Sergeant Garcia. Pickering’s performance packs a peachy punch as they strut the boards with the only exciting and believable dialogue in the piece. Pete Ashmore’s narrator attempts a similar function, but the connection is surface level and lacks the intimacy required to have us at the edge of our seats.

Nick Barstow’s musical direction is interesting. The musical numbers don’t get into gear for quite some time but when they do there are some moments of real passion and drive. It’s difficult to pick out the 9 o’clock number exactly, as there are a few that blend into general wailing and noise. There are also some genuinely intricate percussion and ensemble rhythm sequences that are totally captivating.

Despite the jack of all trades, master of some approach to staging this production, Durham and co have created a moment or two of magic within the arches of Charing Cross Theatre. It’s certainly an impressive feat for a smaller venue with less funding support than some of the powerhouse theatres of the West End. Katie Lipson and Aria Entertainment have struck another powerful chord by collaborating with so many creatives and bringing this magical, if somewhat meandering tale, to the stage!

It runs until 28 May