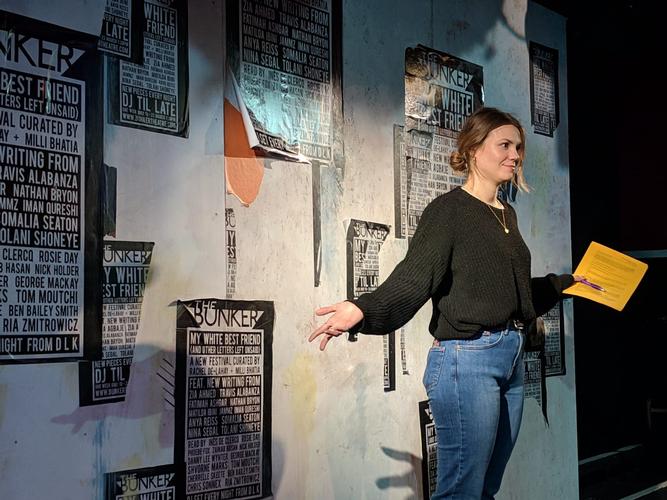 A piece of theatre, or moreover a club night of theatre: The Bunker has been transformed into an immersive nightclub setting for this inspirational night of speaking.
As I entered into the room, I felt as though I should be dancing, moving, but instead I always had the feeling of remembering that I was still in a theatre and it felt foreign to me. It was a unique experience, to say the least. On each night there are three speakers, who open a letter on stage written by various people, touching on various subjects and issues that affect the world. But they don’t know what’s inside the envelope before they open it.

The first speaker Inès De Clercq was nervous, but also powerful and inspiring. Her letter was about an experience with her black friend, around the time of the Black Lives Matter protest. It started with a message from the writer, an instruction to reshuffle the audience: women of colour, ethnicity, disability or sexuality at the front; all white men at the back of the room. If a room can be re-arranged so quickly with simple instructions, then so can the world.


The second speaker, Ben Bailey Smith, opened his letter. It came in the form of rhyming spoken words. Two letters: a white guy explaining his feelings about race to his black friend, and his response. It raised some really interesting points about white privilege and how your talents or academia can be as good if not better than the ones of a white person, but the white person will be seen in a higher light.

Overall, I found that the concept of the night was interesting, and it has real chance to be influential in starting conversations and creating a drive to change racism in our country, but it just needs a little bit of tweaking to make everyone connects, because, at times, I didn’t.