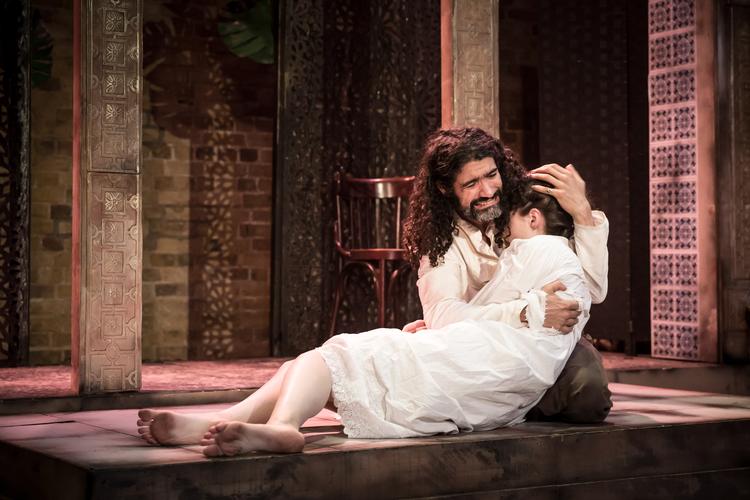 Phil Willmott Company's production of Shakespeare's OTHELLO is set in 1919, in the Punjab region during the British occupation known as The Raj.
English army chaplain Cassio (Jerome Dowling) and the Indian officer recruit, Othello (Matthew Wade), have survived their Sandhurst training together, becoming friends. During this time they first met the wilful and beautiful débutante, Desdemona (Carlotta De Gregori), who will end up marrying Othello in secret.
Iago (Rikki Lawton), Othello’s sociopathic personal servant, is consumed by envy for not rising any higher in the army and is deeply resentful of Othello for his favouring of Cassio. The development of the story is one of deceit, jealousy and… anything else you already know about one of Shakespeare’s most renowned tragedy.

The choice of the historic period and the Indian setting works surprisingly well. The production is thought through in every detail, from the incense that recalls the scents of India to the historically accurate choice of costumes.
The setting is charming, the lighting conveys the emotions of every the most dramatic moments. The acting is very convincing: Rikki Lawton perfectly embodies the persona of the witty, passionate and evil Cassio, and manages to provoke in the audience both bewilderment and laughs. Carlotta De Gregori is a gentle and devoted wife, who establishes an amicable relationship with Emilia (Claire Lloyd), Iago’s wife and Desdemona’s only true friend. The Duke is possibly the least passionate of all, appearing not particularly devastated by the events that will end up with his daughter’s murder.

This play will provide a great night of entertainment that only the Bard could devise. Although revising your Middle English beforehand might be a good idea!

It runs until 6 April