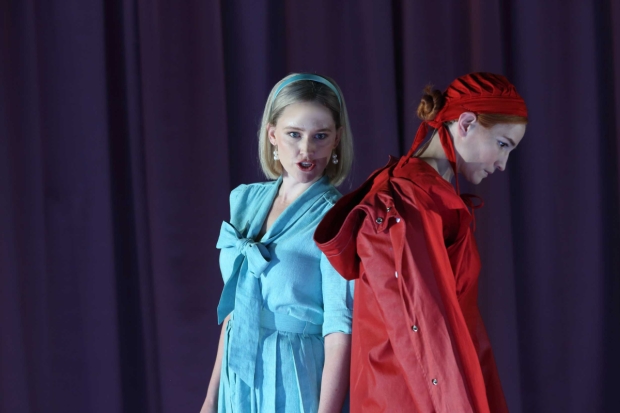 It's been on our TVs. It's on our school curriculum. It's no doubt on your bookshelf. Canadian author Margaret Atwood made such a splash with her 1985 novel The Handmaid's Tale. It is quite simply everywhere. Though it is an actual opera might be questionable. Having seen the work from English National Opera, I can safely put any doubts to bed.

With a rostrum of female talents (both on and off stage), this was my gateway to Gilead, the twisted, Biblical fan-fiction of the United States turned upside down. Opening and closing with a conference, Professor Piexoto (a formal and styled Camille Cotton) sets the scene with a Handmaid's tape, a relic from some 200 years prior (or a few years ago in our timeline). What follows is Offred's testimony on her time in Gilead, where sinful women are taken to be used purely as vessels for babymaking due to a dip in population growth. Offred shares this fate and becomes entangled with The Commander, who bends the ultra-conservative orders thrust upon ordinary people.

Poul Ruders' score is a whole lot to take in. There is a metallic, pounding quality to it all, proven by the anvil and timpani's liberal usage throughout. In other moments you get a touch of minimalism and Gregorian chant. Alban Berg clearly comes to mind in the more experimental fibre of the music, though it was Charles Ives who was most present. Various American folk tunes loiter, Amazing Grace and The Star-Spangled Banner two highlights (the latter also a hark back to Puccini's usage of the anthem). With the texture of Ives, it's a heightened encounter, Ruder's proving an impressive writer for the stage, the opera gaining popular since its creation back in 2000. The libretto by Paul Bently is also sharp, helping to honour Atwood's dark vision. ENO know this well as they also premiered the UK outing directed by Phyllida Lloyd in 2003.

The cast make the show a great success. Kate Lindsey grapples with the demanding role of Offred with honesty and justice the role calls for in a world full of horror and fascism. Susan Bickley in the flashback video is Offred's mother, who only appears in little bursts, always voiced up to the nines, never waining. Robert Hayward takes The Commander with a seriousness and contradictory nature, the perfect context. His mock wife Serena Joy, taken on brilliantly by Avery Amereau, her taunts and bile for Offred, never wain, her toxic marriage one of many disturbing moments. We won't mention how they commit the sex act. Other supporting roles featured Rita from Madeline Shaw, Alan Oke as The Doctor and John Findon as Luke. No one in the cast brought the side down, all jumping on these roles. Driven by a passion, conductor Joana Carneiro led by an immaculate orchestra. The chorus of handmaids was often shrill and moody as well.

Director Annilese Miskimmon formulates the production we expect and we are still impressed by her attention to the more shocking moments of the story is not comprised either. Designer Annemarie Woods makes great use of the expanse of the stage, with red handmaid dummies haunting the start and end, one-armed bandits and a sleazy club also featuring, a rock memorial to the fallen of Gilead another stoic highlight.

Though this production lost two performances due to Covid, its run should be met with much acclaim. It remains a powerful night and I urge you to see it.

It runs till 14 April