‘It’s not a game for gentlemen we’re playing, political and civilized. This is Historic’ 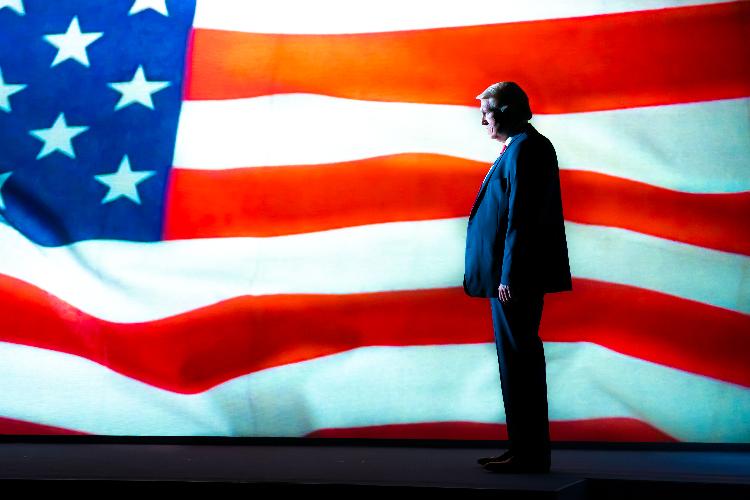 The reign of President Donald J. Trump came to a climactic end in 2020 and despite many more impactful events occurring since, *gestures to the world*, it does still feel like only a few months ago that it happened. However, Mike Bartlett has decided that instead of waiting the full four years for the next presidential election, we should dive right in now and aim to predict what might happen. If Bartlett is anywhere near accurate, we are in for a tumultuous 2024.

The play opens in Mar-a-Lago, with Trump (Bertie Carvel) whizzing onto the stage perched at the helm of a golf buggy. He attempts a putt and misses, and we chuckle. At this point, it felt like this production could go one of two ways. Either it was going to settle in and become an extended skit from Saturday Night Live with Carvel, like Alec Baldwin,  simply portraying a two-dimensional caricature of the former president, or it was going to delve much deeper and deliver something more impactful - thankfully it went with the latter. What ensued for the following two hours and twenty minutes (plus interval) was sharp, insightful and packed with humour. Bartlett and director Goold have used recent history to craft a story of fiction that feels scarily plausible and I was hooked instantly. 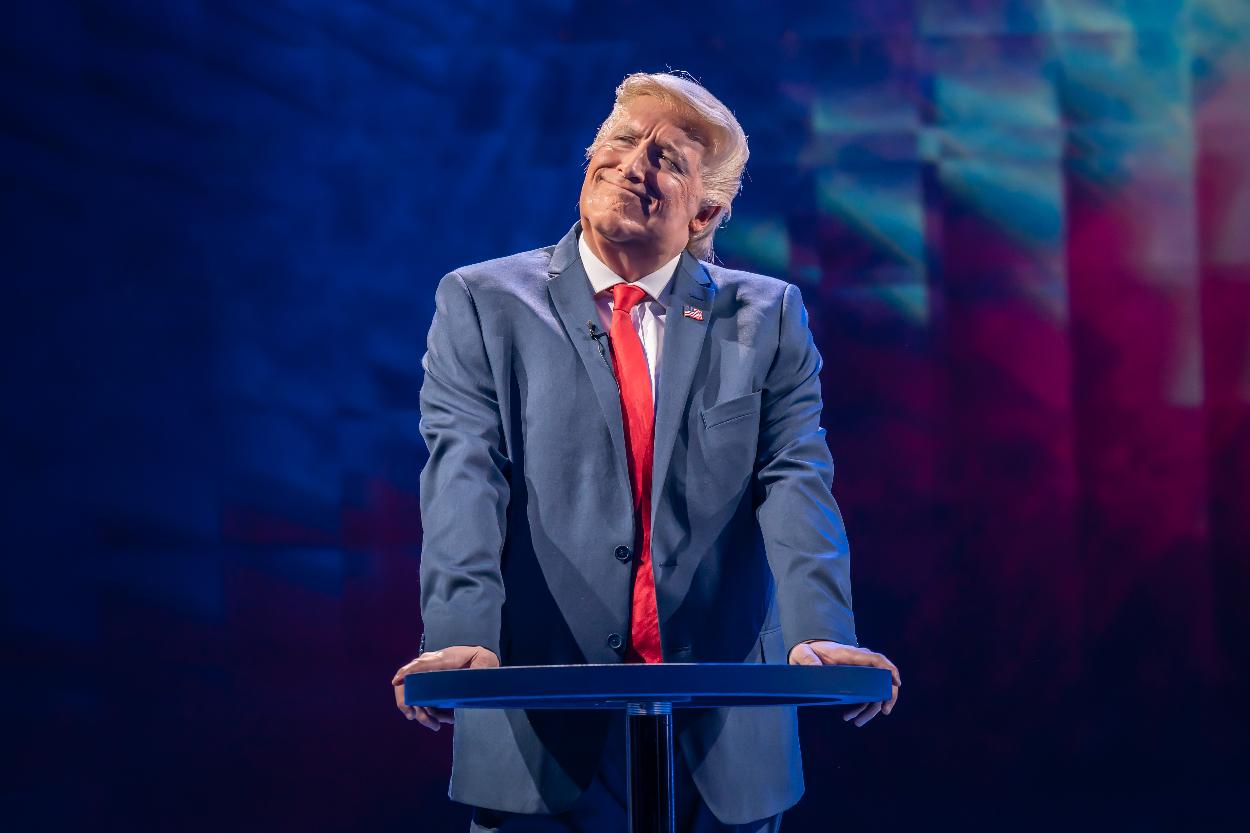 Carvel is brilliant as Trump. He has nailed the mannerisms, the gestures and the noxious ways in which he interacts with those around him. It is a wholly convincing performance that left me feeling uneasy as he moved around the stage with his signature confidence and misogyny. As the play develops it is Tamara Tunie as Kamala Harris, who becomes the focal character, allowing Tunie to deliver a scorching performance. She exudes composure and effortlessly portrays the agonising choices Kamala has to navigate. Lydia  Wilson has the challenging job of depicting Ivanka Trump, who is far less cartoonish,  particularly when compared to her immediate family. Nevertheless, Wilson still delivers a  fine performance. The rest of the cast is packed with talented, each of whom is more than deserving of their place on the Old Vic stage. A notable mention, however, must be given to Cherrelle Skeete who is fantastic as both Harris’s Chief of Staff and Nurse Vita. Oscar  Lloyd and Freddie Meredith are also brilliant as Don Jr and Eric Trump respectively. 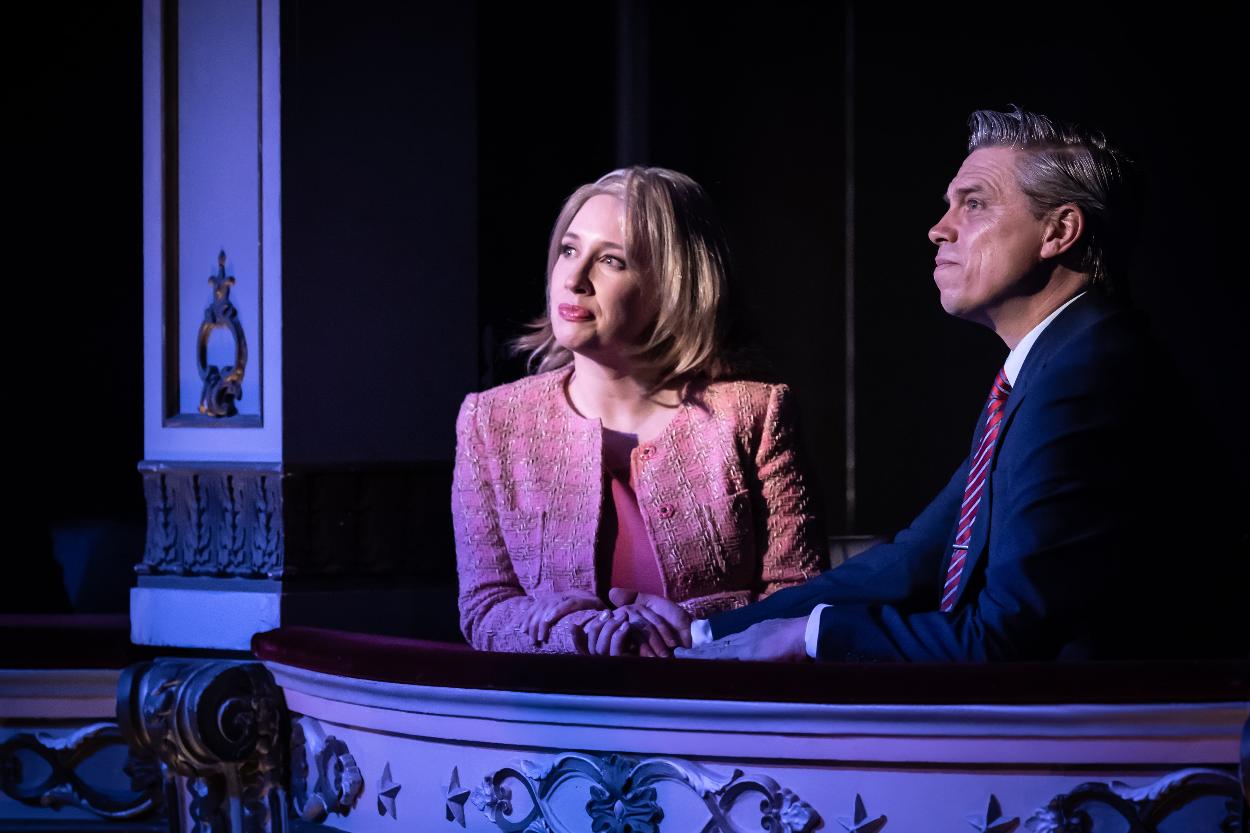 The work of wigs and makeup by Richard Mawbey as well as the costume by Evie Gurney is outstanding. Carvel is completely disguised as the president, but despite the use of heavy prosthetics, his performance is wonderfully unimpeded. This work is matched by the set design from Miriam Beuther, whose smart design effortlessly moves us between live debates and rallies to situation rooms and of course, the oval office, which is framed impressively at the rear of the stage. Neil Austin’s lighting is dynamic and impressive and  when combined with Tony Gayle’s dramatic sound design, is a force to be reckoned with.

The key element that makes this production tick is Bartlett’s use of blank verse/iambic pentameter, meaning that this piece has a modern Shakespearean quality. The rhythmic language drives the piece forward and leads us to draw further comparisons with  Shakespeare’s work. There are elements of King Lear, Macbeth, Hamlet and Richard III  embedded in the play, as modern-day kings and queens attempt to quell the masses and rule in the name of freedom. It is not a faultless production, however. The runtime does drag a tad, meaning the play could be a little more efficient with its length and some of the group scenes fall flat through questionable background acting. The ending does also feel ever so slightly cheap, but this does not lessen the impact of the piece overall. 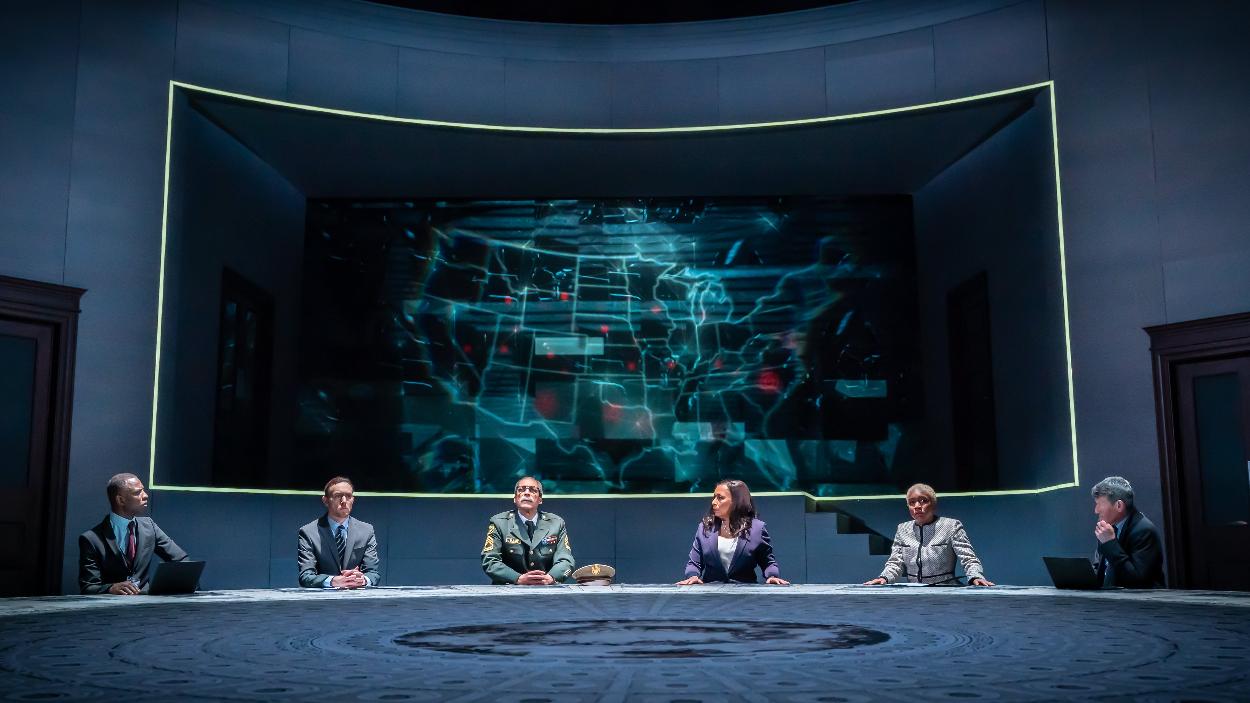 Even though this is a play set in the near future, it truly is a play for now that captures the state of American and arguably global politics as a whole and brings into question how far we will go in the name of loyalty and freedom. It captures the fragility of modern democracy, whilst scrutinising those in America’s top office all under the guise of wickedly funny production. This might not be everyone’s cup of tea but Bartlett, Goold and company have created a fascinating production that will be intriguing to revisit once 2024  rolls around.