Anyone Can Whistle - Review- Southwark Playhouse 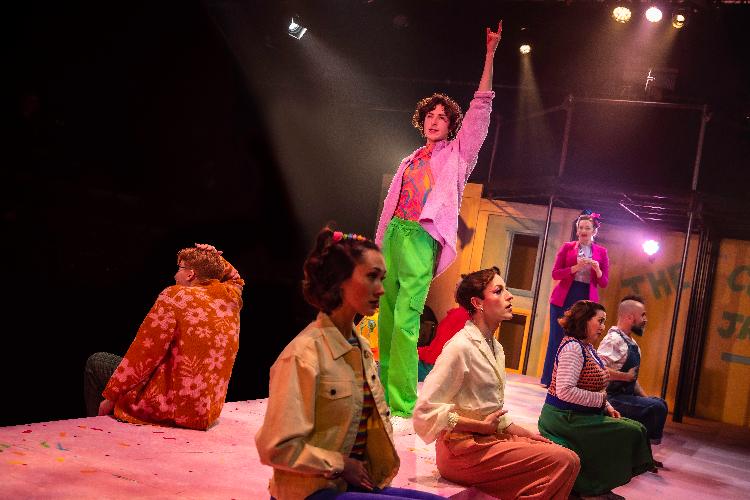 In a failing, fictional town the less than honourable mayor is out of ideas. However, when the plan for a fake miracle crosses her path it seems like plain sailing from then on. That is until a nurse from the local asylum, aka The Cookie Jar, presents them with the ‘miracle’  and events begin to unravel.

After watching this production it became clear as to why this is this is one of Sondheim’s lesser performed musicals, with its bewildering and bizarre story making this a  challenging piece to follow. During the interval, I found myself looking up the plot to make sure I understood what exactly was happening in front of me - I’m still not 100% sure.  The show is carried by a mixture of classic Sondheim, toe-tapping numbers and emotional ballads that are a joy to watch, but sadly they do not wholly compensate for a  befuddling plot.

That all being said, Georgie Rankcom’s production is packed with tremendous talent, flair and hysterical joy. Much of the humour came via stand-out performances from Alex  Young and Danny Lane, whose scenes together were a highlight of the show. Their comedic timing was flawless, and the choreographed dialogue segments were brilliant.  Young in particular eked every last drop of comedy out of the script with her infectious delight in playing the role of Cora. Other notable performances came from Chrystine  Symone, who gracefully captured the struggle of Nurse Apple and simultaneously delivered a sublime vocal performance and Jordan Broatch’s casual charm meant they were thoroughly convincing as Hapgood. Credit must be given to the casting decisions as each of the ensemble members was superb in their respective roles and an overall pleasure to watch.

The combination of Rankcom’s direction and Lisa Stevens’s choreography was perfectly over the top and excessive in all the right ways. With the show performed in traverse,  there was a risk that the space was limited but the team made it work effectively. The music, as previously mentioned, was bold with new orchestrations from Charlie Ingles. It was great having a live band raised above the stage, although there was definite sound balancing issues that were impossible to ignore. Some of Sondheim’s rhythmic and wordy lyrics disappeared under the music, which was a huge disappointment and meant the plot was even trickier to follow. Hopefully, the team can address this moving forwards.

This show does a great job of asking what is normal and whether any of us are and it was intriguing to see a musical tackle such a topic and instead turn the lights onto the audience (literally and figuratively). It cannot be denied, that this is a really fun and vibrant night of theatre that will leave you smiling, albeit a little underwhelmed. It may be worth listening to the character of Hapgood and “think less and enjoy more” if you decide to see this show.

It runs until 7 May.