The world premiere production opens at the Hampstead Theatre 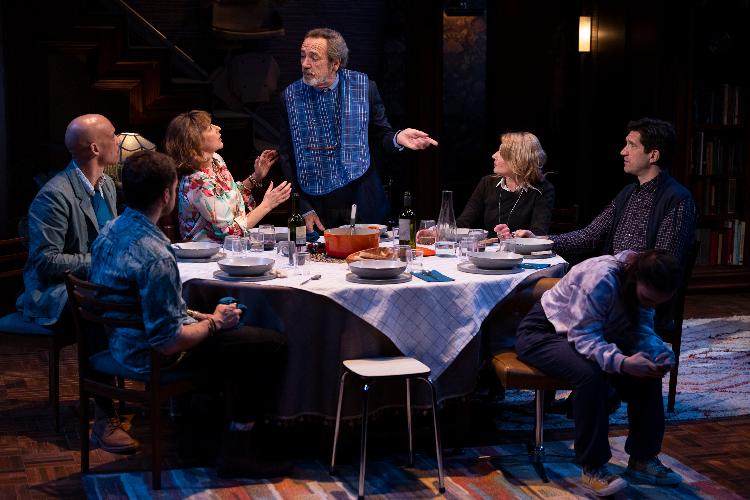 Dusty, musky and marked by old age. That is what Roxana Silbert’s The Fever Syndrome feels like from the moment we set foot into Hampstead Theatre’s auditorium. The impressive three-storey apartment that has been constructed on the stage seems to tower above everything. It depicts an old Upper West Side townhouse - intricately decorated by designer Lizzie Clachan, with decoloured wallpaper, a piano, books and a range of things that have accumulated over many years of inhibition. Several bedrooms, hallways, staircases and a sizeable dining room are the setting of Alexis Zegerman’s play and are put to good use as the story moves from room to room, guided by Matt Haskin’s lighting design,

At first glance noticeable, is the stairlift which remains the focal point throughout the show and quickly becomes the symbol of sickness which is keeping The Fever Syndrome’s Myers family in its grip. Semi-enthusiastically, the stairlift is operated by Lily (Nancy Allsop), the youngest member of the Myers family, as she opens the play by sliding up and down the staircase. Her parents, Dot (Lisa Dillon) and Nate (Bo Poraj) rush in to greet their host Megan (Alexandra Gilbreath) – Professor Richard Myer’s (Robert Lindsay) latest wife. He, himself, Parkinson-ridden and moving in and out of reality and dream, is being honoured for his lifetime achievement in IVF research; the reason behind the family-gathering that is about to transpire.

The Fever Syndrome is a family drama like any other. Secrets are exposed, strained family relations are put to the test, and everyone finally gets their say on the one thing that has been bothering them for years. Anthony (Sam Marks) is investing in a questionable bitcoin start-up, his twin brother Thomas (Alex Waldmann) is finally in a promising, stable relationship, Dot is constantly worried about her chronically ill daughter and her husband’s plagiarism affair, and Megan is exhausted from being a full-time carer to her husband. As for Richard, being the centre of the story, he is a grumpy man who was never a good father in the first place and is fully convinced of his idea that scientists are gods.

Zegerman’s play feels like a Chekhovian exploration of family relations. Dialogue-laden, the play’s characters talk a lot but feel very little. Contributing to every conversation with some scientific fact or other, the writing makes it hard for the actors to shake the penmanship and breathe life into their characters. One stereotype is followed by another, and as much as tapping into clichés is rewarded by occasional laughter from the audience, it does tire out after a while. And on every occasion in which a suitable joke could not be found, Richard comes along with a comment about the New York Mets, ensuring that the audience is still paying attention and has not lost touch with the two-dimensional family gathering in the Upper West Side abode.

As interesting as the preposition of a grandfather with Parkinson’s and a chronically ill granddaughter might sound, The Fever Syndrome fails to explore that disparity. Instead, it delivers lengthy discussions about inheritance, defying family genes, and whether or not Richard belongs in a care home. Where there are moments that could make for interesting directorial decisions, Silbert taps into classical theatre tropes and closes the show with a carefully arranged but disappointingly inaccessible tableau of a troubled family.