Diary Of A Somebody - Review - Seven Dials Playhouse

The dramatisation of The Orton Diaries opens at Seven Dials Playhouse 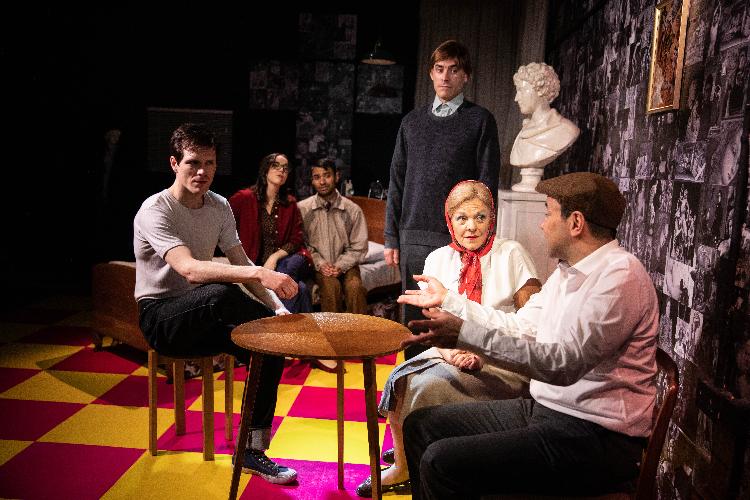 The newly refurbished Seven Dials Playhouse’s second production revives a piece from the mid-1980s although the writing actually goes back twenty years earlier than that. Diary Of A Somebody is credited to John Lahr though technically he might be said to be the arranger/editor. For the actual words are those of Joe Orton as recorded in a journal that he decided to keep in 1966/7. This covered what turned out to be the last eight months of his life at the end of which he was brutally bludgeoned to death by his partner Kenneth Halliwell; the latter then took his own life. It was a notorious cause célèbre which brought to a sudden end the meteoric rise to fame of a playwright who would almost certainly have gone on to greater glory.

For Orton had only written a mere handful of plays and had at first struggled to find acclaim. Loot turned the tide, and he was lionised by his contemporaries. In between writing and engaging in an energetic sex life, the diaries give a candid overview of Orton’s tempestuous relationship with the increasingly embittered and unstable Halliwell. Although he comes across as vain, temperamental and habitually difficult, constantly whining and threatening suicide, this is all from Orton’s perspective and possibly paints a rather biased picture.

The show is very episodic with a multitude of scenes that tumble over one another and evoke the era of the Swinging Sixties. After a while, this becomes a trifle wearing and I started to find myself longing for a scene which explored matters in greater depth, and which gave the actors time to develop their characters more fully. George Kemp is excellent in the central role and, as well as having a look of the real Orton about him, he captures the charisma and mischievous tone of the writer, especially in his direct addresses to the audience. Toby Osmond as Halliwell seems rather one note at first but I think that comes back to the subjective nature of the diary entries; it was actually a clever performance that grew on me and even managed to elicit some sympathy as the man’s desperation just to be noticed became more palpable.

As Kemp and Osmond remain in fixed roles, the remaining four cast members (Jemma Churchill, Jamie Zubairi, Sorcha Kennedy and Ryan Rajan Mal) have a great deal of work to do in presenting sketches of the other 46 listed. Among some of the famous names of the time (e.g. Paul McCartney) there is Orton’s mischievous alter ego character Edna Welthorpe (Mrs) embodied successfully by Churchill as a prototype Mary Whitehouse. I enjoyed Zubairi’s camp turn as Kenneth Williams who, while looking nothing like his subject, captures the vocal inflections well. I hope that he eventually gets a little more secure with the script but as he’s playing no less than 17 roles perhaps some hesitation is forgivable.

Valentine Gigandet has provided a multi-function day-glo floored set which evokes the era perfectly and there’s a great soundtrack (Beatles heavy) which also  helps the context – not to mention the pervasive smell of herbal cigarettes so redolent of the so-called permissive society. The whole is directed in a sprightly fashion by Nico Rao Pimparé.

Diary Of A Somebody is at the Seven Dials Playhouse until  April 30th.