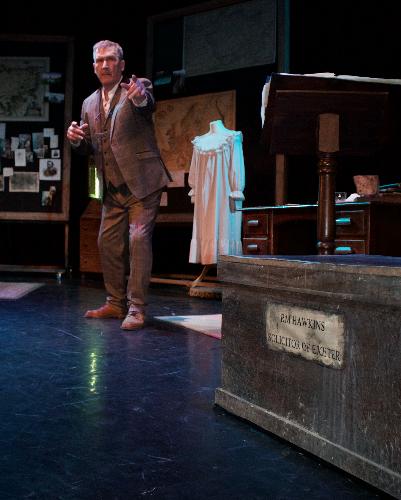 Dracula. That infamous name is associated with nightmares of a creature in the dark, a castle on the hill and something that mustn’t be invited in. Bram Stoker’s fictional creature is horror enough to set the scene for this iconic tale.

James Gaddas opens his one-man play by introducing himself as an actor and presenter in a bright stage light and nonchalant manner. The backstory is soon set with the understanding that Gaddas is retelling a true tale of his vampire hunt by request of his agent to create a documentary. Throughout the show, Gaddas jumps between the present retelling and his past self, including the characters in the story.

With huge potential, this telling of ‘Dracula’ doesn’t quite land. The pacing is fast and stilted, not allowing for the atmosphere to creep into great moments of silence which is where true horror can play. The comedic touches would have been great, were they placed correctly, however they sporadically appear in moments of tension that breake any sense of uneasiness.

Despite this, the ending has an indication that this sought after atmosphere can be achieved when the script allows an eery moment to breathe and Gaddas goes to free Dracula’s spirit into the very theatre, with the touch of a soundscape of the theatre doors locking.

Gaddas and Minithorpe’s ‘Dracula’ has the potential to be the exciting, dramatic retelling of the classic tale, but doesn’t quite make it, as the promise of an atmospheric horror falls short.

‘Dracula’ will be touring around the UK until the 10th of April.