A hyper-intense transfer from VAULT festival 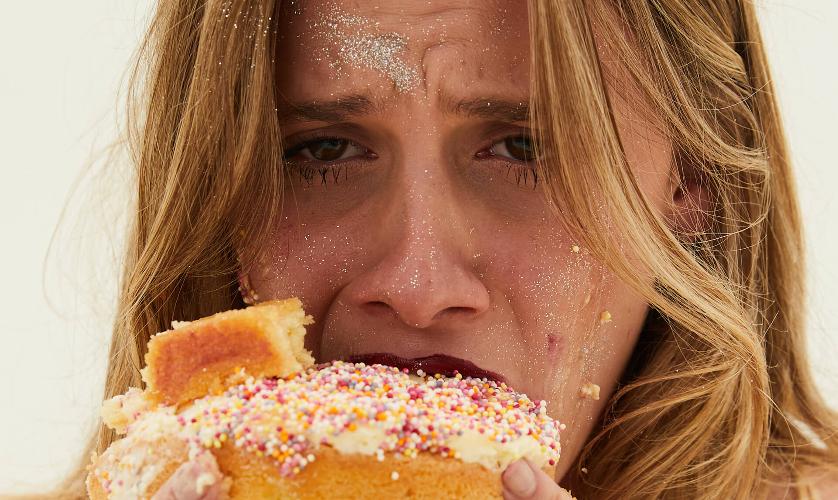 Sarah Edwards’ tragic fate is still fresh in every Londoner’s memory. And so, it is no surprise that campaigns such as ‘Reclaim the Streets’ have paved the way for the original form of protest: theatre. Brave Face, directed by Maria Cristina Petitti, is a play that has been swept in with important conversations about violence against women and safety for women in society. After a successful run at Edinburgh Fringe, the company Hoo Hah House have returned to London with their multi-media one-woman show for a run at Omnibus Theatre and VAULTS Theatre.

Designed with a massive wooden bed frame as the centrepiece of the stage, the show invites us into the bedroom of an independent woman manoeuvring young adult life – Em (Everleigh Brenner). At an incredible pace, she grows up and grows into herself as an affair with fuckboy Connor turns into intimidating encounters with less-than-kind men which she calls Blackmail Dates. Em is an orthodontist student trying to make terrible events in her past work in her favour. Being followed home at night, sexually harassed in the workplace, and suffering from unconsented violence in the bedroom are among the many terrifying moments for which she puts on a brave face and keeps pushing through.

What is particularly clever about the show is the interplay between projection and performance. Although it is just the writer and performer Everleigh Brenner on stage, the one-sided conversations between the protagonist and her male acquaintances are so well written that it is easy for us to fill in the blanks. Projections of bars, bedrooms, empty streets at night, and men in Em’s life (designed by Elaina Mensing), paint a clear picture of the world she lives in.

Unfortunately, we are never allowed a moment to take all that in. Brenner’s performance unfolds at such a fast pace, that it is sometimes hard to keep track of the storyline and be affected by what is happening. And although the play does come to a decisive revelation, in the end, it appears frazzled and lacking a clear through-line for most of it. Brave Face feels like a rollercoaster that just keeps going up and up.

Conversations about violence, and specifically sexual violence, are as necessary as ever, however, Brave Face attempts to draw from every woman’s bad experience and includes it in Em’s story, without giving us a chance to take a breath and let it affect us. And as good as Brenner is at slipping into the skin of a woman who has experienced trauma, we are only granted one look behind the mask when she shares a poem with us and diverts from her usual fast delivery of lines and a hyper-energetic performance.

Intended as a comedy, Brave Face’s dark themes and relevant topics don’t allow for too many humorous moments. And although Brenner tries to engage the audience from the get-go, there is just no time to react and interact in this hyper-intense, hour-long show.