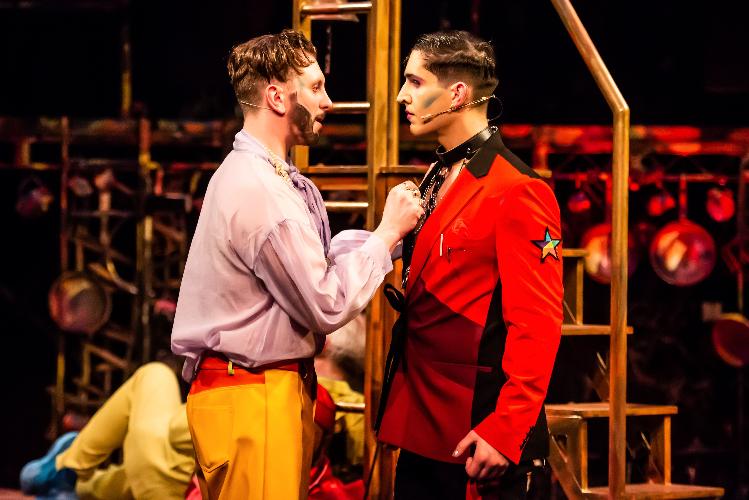 It may be fair to say that Shakespeare has been overdone. Seemingly every possible version has been performed or adapted in a myriad of different ways and therefore it can be challenging to find a new take on the well-known texts - I think we can agree that we don’t need to see another performance of Macbeth dressed in an office setting garbed in dull, grey suits. However, Wildcard have struck gold with their interpretation utilising the techniques born of their previous award-winning work.

To quote Trinculo, “Oh my troth,” the music for this production is sensational. Jasmine  Morris as composer and Daniel Balfour as sound designer have crafted an ever-evolving soundscape that ebbs and flows with the text - not to mention the delightful original songs performed throughout. Highlights, of which include the duets between Miranda and  Ferdinand and any song involving the unwavering voice of Alexander Bean as Caliban.  The multi-talented cast extract all possible timbres from their instruments in aid of the music, accompanied by their strong voices to boot. Though there are a few moments when the text is overpowered by the score, the music makes the sometimes fiddly words of Shakespeare more accessible due to its ability to emphasise key moments and capture the emotion of a scene. The music tells the story just as well, if not better than the words the actors are speaking.

Thanks in part to the new arrangement of the Pleasance’s main house (cabaret-style seating), it is very easy to be drawn into the remote island setting that the Wildcard creative team have developed. The overall design is sensational and incredibly thorough.  Luke W. Robson must be commended for his cohesive and wild set and costume choices that instantly set the tone for the type of production the audience is about to revel in. It is lit well by Sherry Cohen, accomplishing stunning set pieces albeit a little heavy-handed when it comes to her use of strobe.

Wildcard have brought together an incredibly well-cast ensemble of actor-musicians, with  Kate Littlewood at the helm as Prospero. Littlewood is commanding and convincing and accompanied well by Loren O’Dair as Ariel. O’Dair has the opportunity to show off not  only acting and musical ability but also her acrobatic prowess in the air. Her voice is also acrobatic as throughout it is hurled around the space by Balfour’s sound design, a  wonderful effect to enhance her performance as the spirit. The humour in this production is well and truly delivered by Gigi Zahir (Trinculo) and Eleanor House (Stephano), each of whom is exceptional, particularly when breaking the fourth wall. Their timing and ad-libbing are on point, ensuring once again that this version of The Tempest is accessible and joyous. The rest of the cast were all impressive and it would be all too easy to spend the rest of this evening writing about all their enchanting moments - though a particular shout out must go to honorary cast member Ibraheem.

Having been a fan of Wildcard’s previous work, it is so exciting to see what they can achieve when given more space and funding. They have taken the best elements of Electrolyte and run wild with new possibilities, so James Mereyard (director/writing/ founder), keep doing what you are doing because it is working. This adaptation somehow expands the horizons of how Shakespeare can be performed and deserves to be seen by as many eyes and heard by as many ears as possible. I urge you, go and get caught up in the storm that is Wildcard’s version of The Tempest.

It runs until 3 April.