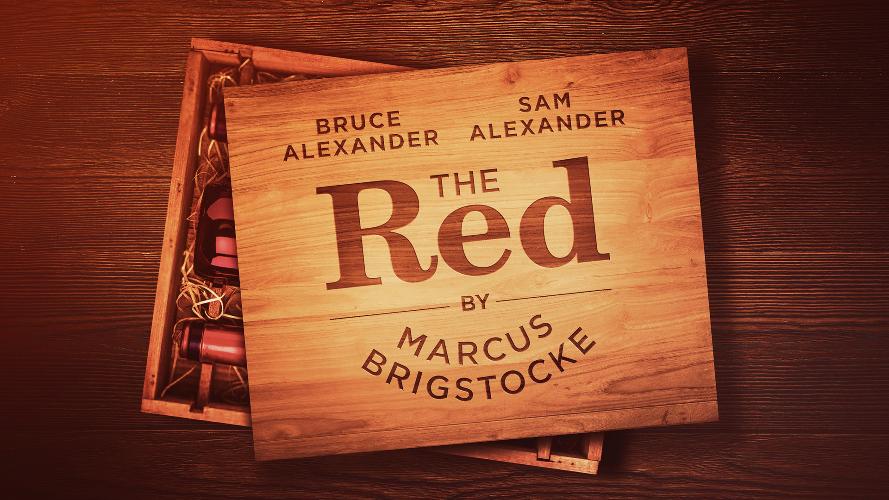 Having seen Marcus Brigstocke’s name attached to the latest online piece from Original Theatre, I instantly assumed it would be a broadly comic play that was strong on laughs and reasonably light on subject matter. Although there are plenty of funny lines and witty remarks in The Red, it is essentially a far more sobering affair than that – and I use the word “sobering” quite deliberately. For this is a play about two men’s relationship with the bottle and how both have come to terms with something that can give pleasure but also is capable of delivering a whole world of pain.

The title refers to a bottle of Chateau Lafitte 1978 set aside for father and son John and Benedict to drink together. Just two problems – the former has died and is in no position to drink anything and the latter is a recovering alcoholic … and is in no position to drink anything. The play is essentially a dialogue between their respective positions as a ghostly manifestation advances reasons to support and enjoy oenology while the other reflects on 25 years of sobriety and the benefits that this has brought. “Why do you drink?” asks the son; “because I like it” replies his dad. “Why don’t you drink?” counters the elder; “because I like it” is the dry (in every sense) response.

Brigstocke has based the play on his own early life struggle for sobriety and advances both sides of the argument with equal clarity (or should that be claret- y?). Yes, it can get a little repetitive and there is the occasional glib line which could only exist in something artfully constructed but there’s no denying the essential power of the piece. It can also seem a little static and betrays its origins as a radio play but in the main, it is a gripping account with some knife-edge “will he, won’t he?” moments. This main tension centres on whether Benedict will succumb to his father’s initial request to drink again which is just sufficient to sustain the piece for the hour for which it runs. The pace doesn’t flag and provides a really interesting point of debate which gradually broadens into an examination of a whole relationship between a parent and a grown child. As the roles are taken by real-life father/son Bruce and Sam Alexander this adds an extra dimension to the drama; the familial bond lends the playing certain ease and believability.

The set (Alex Marker) is inevitably a wine cellar – a place that looms large for both men albeit for different reasons and the titular bottle of wine itself is often foregrounded as though it was a third, silent, character in Charlotte Peters’ deft direction. There are also occasional cutaways to the venue where the piece was filmed at The Vaults in London (essentially then, a cellar within a cellar) which reminds us that we are watching a play rather than a film. While I’m not sure that is strictly necessary it does serve to reinforce the origins of the show. However, as Original Theatre has become known for in the last couple of years, this is a hybrid production that manages to combine the best of both worlds. It perhaps takes fewer risks than we have grown used to seeing from them, but it continues their run of successful online productions (now well into double figures) which sit alongside their gradually returning live work.

The Red is available on-demand via the Original Theatre Company’s website.