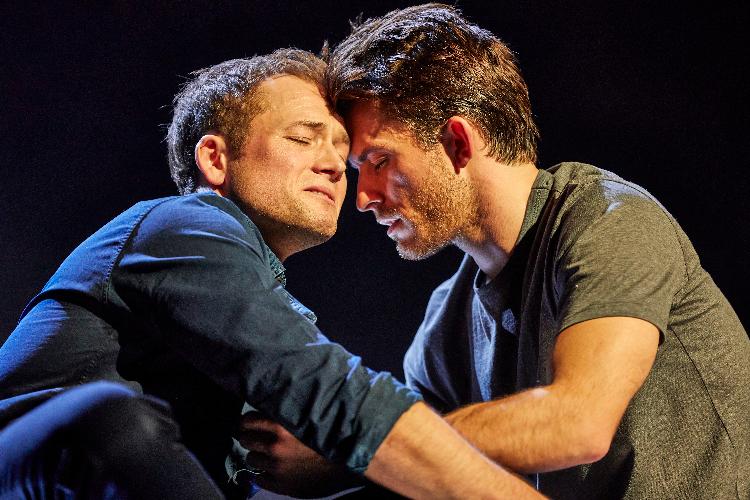 Cock is an intense 90 minute drama by Mike Bartlett that was staged for the first time in 2009. Even if many years have passed, this revival about love, choice and sexual identity is as fresh as ever.

John (Jonathan Bailey), the only character of the play with a name, is gay, or at least he has always considered himself gay, and is in a long-term relationship with an older partner (Taron Egerton). One day, John meets a woman (Jade Anouka), they share the same commute and this gives them the chance to know each other well. They develop mutual feelings and John starts questioning his sexuality, until he is asked to make an inevitable choice.

The minimal set by Merle Hansel (there is no furniture nor are there any props, and the actors keep moving around) and the lights by Paule Constable make the interactions between the characters and the raw dialogues the real centre of the play. And it is remarkable how it switches from a light tone of the first (funny) part to an emotional second half and an open finale.

The four actors give very strong performances and this is so important in a show like this one, which greatly relies on the quality of the acting.

Jonathan Bailey and Taron Egerton have good chemistry. John’s dilemma is portrayed honestly by Bailey and it’s hard not to feel for him, but all the characters feel genuine. The problem of the play is that none of them is likeable. They all act selfishly and keep hurting each other, and probably this is what Cock is about. Yes, it is a show about sexuality, but it is mainly about how we see each other into a relationship and how far we can go and how much we can lie and cheat, before we reach the breaking point.

Cock is a simple story with an interesting concept and good dialogues, but doesn’t go much in deep and has little substance. But it will make you question, talk and think about love, sex, and sexual indecision.