Conspiracy theories of a nautical kind 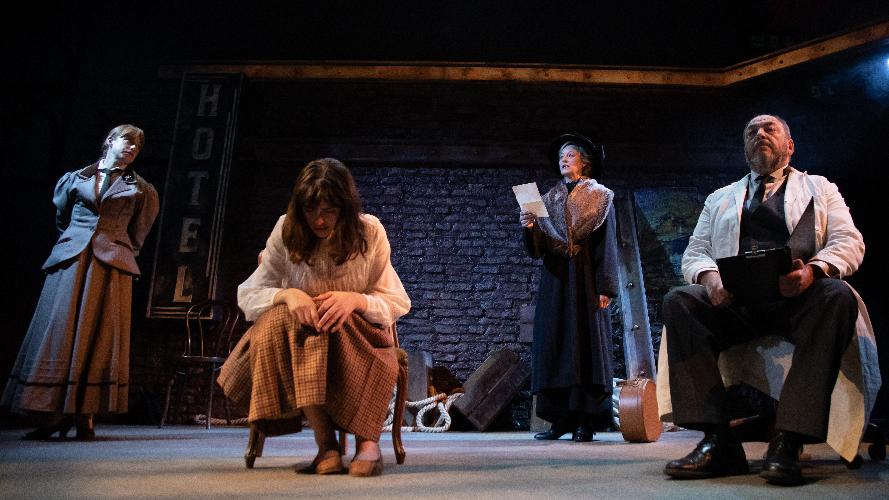 Six months after the tragic sinking of the Titanic, Emma is searching for answers. Differing accounts from survivors have left her with questions about the true cause of the catastrophe that took her fiancé's life. Through her investigations, following a chance encounter with a journalist,  she uncovers secrets and conspiracies that go further than she could have imagined. Or does she? It is hard to say because this play is incoherent and muddled from the get-go.

Hutchinson has used the setting of the Titanic aftermath to highlight topical issues such as media impartiality and fake news and there are great moments when the characters discuss the challenges faced by those wanting to reveal the truth but on the whole, the writing has the subtlety and delicate craft of an 800ft ocean liner. The heavy-handed approach causes the plot to become messy and challenging to follow as though significant chunks are missing and replaced by convenient coincidences that remove all plausibility and belief for the story.

The characters are two-dimensional at best with no clear motives for their actions. There is almost no development even for the lead Emma, who towards the end is suddenly portrayed as disturbed and unhinged for no compelling reason. Some characters are barely explored, with  Hutchinson substituting the character growth for jokey quips that do trigger laughter from the audience, but in the context of the play are jarring, forced and uncomfortable.

The cast does their best with the half-hearted material - Genevieve Gaunt as Emma has some quality moments, and Sarah Ridgeway is well cast as the dominant Pinkerton, Spinks. The rest of the creative elements are sadly nothing much to write home about, including the lacklustre direction from O’Callaghan. Yes, the production is in a small venue, but so many productions find creative means to use the space available to tell their stories in engaging and varied ways - this play did not do that.

There have been so many retellings of the Titanic story and this one had the potential to look at the event from a new perspective as well as delve into the world of conspiracies but instead, it is untidy and confused.

It runs until 9 April.