What baking can do 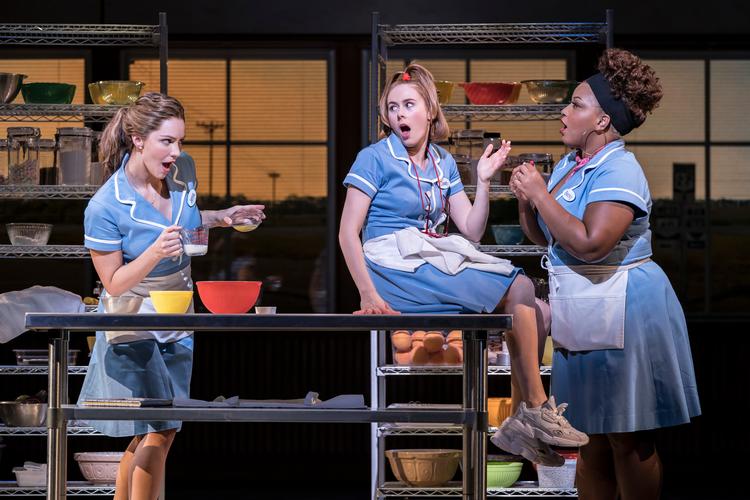 Waitress is a musical created by an all-female lead team: Jessie Nelson who wrote the book, Sara Bareilles who wrote the music and lyrics and Diane Paulus, who directs the show. Based on the 2007 movie of the same title, it follows the story of Jenna (Katharine McPhee), a woman who lives in a small town in America and is trapped in an abusive marriage with Earl (Peter Hannah), until she gets pregnant. She escapes from her trauma through the baking of pies, creations of her own that she names after their uniquely combined themed ingredients and the events that inspired them, and recipes of her mother’s that once instructed her own baking. She sells her goods at Joe’s (Shaun Prendergast) Pie Diner, where she’s also a waitress, with Becky (Marisha Wallace) and Dawn (Laura Baldwin), Jenna’s best friends and closest confidantes. When Jenna meets her new male gynecologist  Dr Pomatter (David Hunter) she’s forced to face up to all the things inside her that are hurting, and take action to change them.

It is always difficult to blend comedy and drama, especially when it comes to domestic abuse – something that is more common than one would think (in fact one in four women experiences domestic violence). But Waitress achieves that, mixing laughter and dark moments that can be uncomfortable to watch

All of the leading ladies have amazing vocal ranges and acting abilities, they are the true stars of the show! Katharine is just sensational: she dreams to escape, she struggles to do the right thing and she wants a better life for her child. When she sings “She used to be mine", a beautiful and intense ballad, her powerful voice is incredible. David Hunter gives an excellent sensitive and funny performance as the young doctor, new in town.

Some of the characters are underdeveloped and the situations they find themselves in seem a bit forced, especially the love story between Dawn and Olgie (Jack McBrayer). The fairy tale ending too seems unlikely. It is not easy that easy –unfortunately – to get rid as of an abusive relationship as Jenna does. Also, it feels a bit short-sighted, in that it doesn’t take into consideration the fact that our  decisions can still have difficult or unpleasant consequences.

Scott Pask has created a simple but effective set and had the original idea to place the band on the stage, blended among the customers.

In all, Waitress is an excellent production, with a good balance of upbeat, drama, comedy and emotion and a fabulous cast. The pie is ready to be served.

Waitress is booking at the Adelphi Theatre until 19th October. Tickets from £ 23: click here