A new production based on real life events 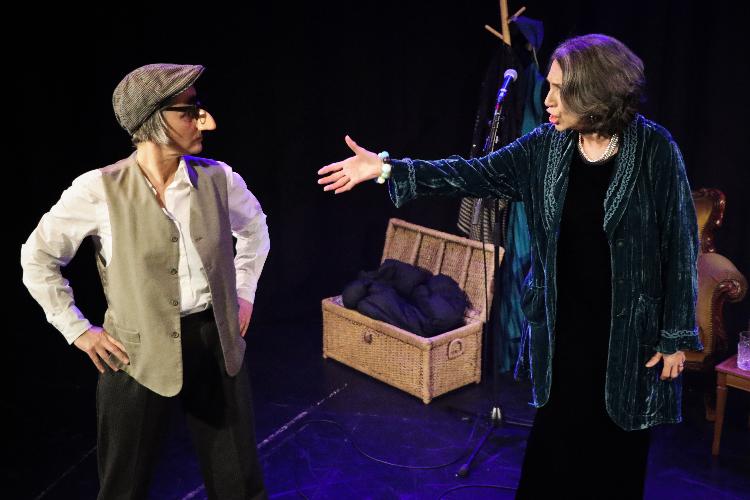 We are welcomed into a dimly lit living room in Gemma Barnett’s Agatha. A cosy armchair, an overflowing suitcase, a side table, and a microphone fill the stage. Agatha (Olivia Carruthers), the lady behind the title, is positioned languidly in the middle of it. Nipping on a glass of liquor, Carruthers appears perfectly at home in her little living room set-up as the audience takes their seats in the Pleasance Theatre’s downstairs venue.

The lights dim and we are soon introduced to the other two characters essential for the play: Rose (Suzanna Hamilton) and Jo (Gemma Barnett) – mother and daughter. Engaged in a heated argument with her mother, Jo has a hard time deciding whether she should step out of the car and walk into the abortion clinic they are parked in front of. Unfortunately, Rose is not of much help, leaving the choice up to her daughter and merely reaffirming her in any pro or contra argument.

Carruthers, having watched the scenario pan out from the comfort of her living-room set up, decides that it is time for her to step in. Taking over the microphone conveniently placed next to her armchair, she contributes to the discussion. And suddenly, director Martha Geelan takes the play in a completely different direction. A change of lights, jazzy background music, and animated Carruthers invite us to become part of something that feels a lot like a game show. Encouraged to interact and react by an overpowering laugh track, and reinforcement from Carruthers to clap and engage, the play calls for audience participation though never quite achieves it.

Intricately, Agatha engages in a much-needed conversation about abortion and what it means to bear a child. Through the eyes of three generations of mothers, Barnett’s occasionally constrained writing recounts the history of abortion but also delivers a gratifying feeling of connection to each character. Not only is it comforting to find out that Jo’s nan experienced the same emotional turmoil when pregnant, but it is very engaging to be immersed in Jo’s unusual imaginary afterlife stage in which she can finally ask her nan all the questions she has ever wanted to ask. Willingly, Agatha storms across the stage, sharing her story and directing her daughter Rose and granddaughter Jo to portray all the different characters that have made a lasting impact on her life – psychiatrists, husbands, welfare officers, GPs and so on.

Watching Hamilton and Barnett slip in and out of characters from Agatha’s life is thoroughly enjoyable. The suitcase on stage acts as the costume department providing the two actors with glasses, jackets, and hats to transform in front of our eyes. Jazzy and sometimes melancholic music composed by Katy Hustwick serves as the backdrop for most of the performances. However, it should be said that Geelan can allow herself to trust the audience more and let the words speak for themselves rather than relying on the music and laugh track. Instead, snippets of spoken word poetry exploring the family’s relationship to alcohol and Agatha’s unusual view on love, should take their place and lead the story.

Connecting with her grandmother one last time in the afterlife affirms Jo that “this isn’t about her” and that we all must make our own decisions. Showcasing three great women in Gemma Barnett’s life, Agatha is an unconventional play that presently lacks the confidence of its name giver.

It runs until 5 March.