Osric Omand and the Lockdown Cock-Up! (the Zombicron Variant) - Review - Hen and Chickens

Bizarre, chaotic and completely bonkers, the Osric Omand and the Lockdown Cock-Up is quite the night out 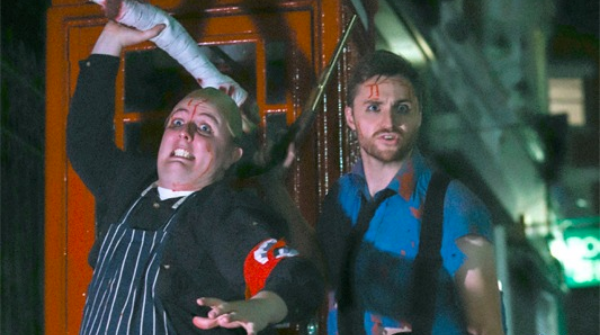 In the intimate settings of The Hen and Chickens Theatre, the play opens with a rather impressive and comically lengthy fight scene between the protagonist, Osric Omand (played by Joseph Emms) and Elizabeth Back. Post fight scene, Omand addresses the audience and welcomes us to the universe of Monstopia and some backstory as to what we just witnessed.

To say the rest is chaotic, would be an understatement. Between the frantic dialogue and confusing plot line, there were some golden comedic ideas. A comment of ‘I saw it on Tiktok, so it must be true’ and the real monster being a ‘mutated paedophile’ certainly proved there were strong comedic elements and that the writer (Joseph Emms) wasn’t afraid to break boundaries.

With a drink (or several) in hand, a good group of pals, Osric Omand and the Lockdown Cock-Up is light-hearted, silly fun for those looking for it.