The show is back in the West End 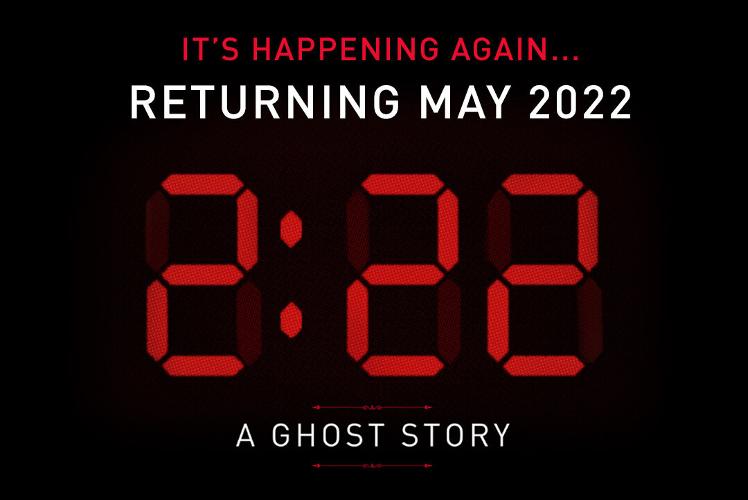 It has been announced that the critically acclaimed, smash hit, supernatural thriller 2:22 A Ghost Story will transfer for a second time to The Criterion Theatre where it will play a 17.5 week season opening on 7 May 2022.

The production began its life last summer at the Noel Coward Theatre starring Lily Allen, Julia Chan, Hadley Fraser and Jake Wood. It then transferred to the Gielgud Theatre for 10 weeks from 4 December 2021. The production there starring Stephanie Beatriz, James Buckley, Elliot Cowan and Giovanna Fletcher completed its run on 12 February 2022. The cast for the transfer to the Criterion Theatre will be announced soon.

2:22 is written by award-winning writer Danny Robins and is directed by Matthew Dunster. Look out for the clues to unlock the mystery in this brilliantly funny and intriguing play; it’s an adrenaline-filled night where secrets emerge and ghosts may or may not appear…
Danny Robins said: "I'm so damn thrilled that the 2:22 - A Ghost Story journey gets to continue. The response to the play so far has blown me away. Since I was a kid I've been obsessed by ghost stories, and I'm so glad that theatre audiences seem to feel the same way. My aim, writing the play, was to create a fun, spooky, thought-provoking night out, a show that leaves you buzzing, on the edge of your seat, questioning what you believe. If you haven't seen it yet, I hope you'll come down to the Criterion and see what you believe... if you dare!”

Jenny believes her new home is haunted, but her husband Sam isn’t having any of it. They argue with their first dinner guests, old friend Lauren and new partner Ben. Can the dead really walk again? Belief and scepticism clash, but something feels strange and frightening, and that something is getting closer, so they’re going to stay up... until 2:22... and then they’ll know.
2:22 - A Ghost Story features set design by Anna Fleischle, costumes by Cindy Lin, lighting by Lucy Carter, sound by Ian Dickinson for Autograph Sound, and illusions by Chris Fisher.