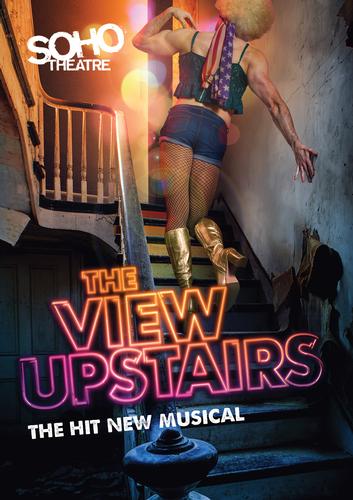 Jack Maple & Brian Zeilinger for Take Two Theatricals, and Ken Fakler present the European premiere of new LGBTQ+ musical THE VIEW UPSTAIRS from 18 July to 31 August at Soho Theatre, following a triumphant run Off-Broadway, multiple regional US productions and a recent Australian premiere, THE VIEW UPSTAIRS is written by young up-and-coming artist Max Vernon and will be directed in London by Jonathan O’Boyle (Aspects of Love, Pippin, Hair), with choreography by Fabian Aloise (The Rink, Madagascar The Musical, Our House, Working). There will be a national press night on Tuesday 23 July. Casting is to be announced.

Max Vernon is a three-time Drama Desk nominee, Out100 Honoree and recipient of the Lucille Lortel Award for Best Musical, Richard Rodgers Award, Jonathan Larson Grant, New York Stage and Film's Founders Award, New York Foundation of the Arts Fellowship and the JFund Award from the Jerome Foundation. He has been a Dramatist Guild Theatre Fellow, MacDowell Fellow, and an artist in residence at Berkeley Rep, Ars Nova, Kimmel Center (via The Public Theater), Disney Creative Entertainment and Rhinebeck Writer’s Retreat, among others. His musical KPOP had a sell-out run at Ars Nova in October 2018 and was the most nominated Off-Broadway show of the 2017/18 season. Max’s notable concert performances include the Kennedy Center, Lincoln Center, Joe's Pub and The Metropolitan Museum of Art.

Max said of the London production, “As a devotee and lover of British theatre, art, music and culture (from Caryl Churchill and Joe Orton to Alexander McQueen and Vivienne Westwood, Roxy Music, T. Rex and Siouxsie and The Banshees), it has been a lifelong dream of mine to bring an original musical to London. For that show to be The View UpStairs - which is high fashion, rock and roll, queer, subversive, and speaks to an important forgotten history in the LGBTQ+ community - that is an enormous opportunity. I'm obsessed with the director & producing team's vision for how to mount this work. We are ready to turn it the f*q out and create something iconic & unheard of at the Soho Theatre.”

The musical opens in present day when Wes, a young fashion designer buys an abandoned space, not realising this had been the UpStairs Lounge, a vibrant '70s gay bar in the French Quarter of New Orleans, which, in 1973, was burned down in an arson attack, killing 32 people, making it the worst attack on the LGBTQ+ community until the 2016 shooting at The Pulse nightclub in Orlando. THE VIEW UPSTAIRS brings to life this forgotten community and takes the audience on an exhilarating journey of seduction and self-exploration, celebrating the lives of those forgotten, while featuring a soulful, rock and jazz score.

Jonathan O’Boyle said, “I’m thrilled to be working with Max Vernon on his brilliant new musical The View Upstairs for its European premiere at Soho Theatre this summer. The View Upstairs is a beautiful, uplifting musical that celebrates the lives of these forgotten people. Max is a brilliant new voice in modern musical theatre, and this show, inspired by true events, takes us on a radical, rollercoaster ride through the extraordinary lives of these special human beings.”

5
THE VIEW UPSTAIRS opened to rave reviews Off-Broadway in 2017, where Entertainment Weekly described it as “a moving homage to LGBT culture, past and present”, and the musical gained support from some of the LGBTQ+ community’s biggest advocates, including RuPaul. The London production of the musical is one of ten that have been and are being mounted around the world between 2017 and 2019, and there is an original cast recording available on Broadway Records.