The show comes back to the West End 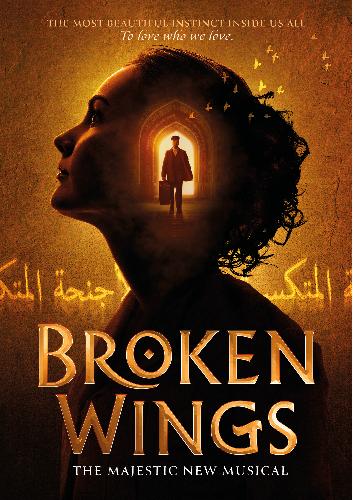 Aria Entertainment today announces they will stage a musical adaptation of Kahlil Gibran’s Broken Wings by Nadim Naaman and Dana Al Fardan. After multiple productions of the musical in concert form around the Middle East this will be the first full staging of the musical. The production, directed by Bronagh Lagan, opens at Charing Cross Theatre on 26 January, with previews from 21 January, and runs until 5 March 2022.

Nadim Naaman said today, “Nearly four years after our semi-staged concert debut, I am frankly ecstatic that Broken Wings is returning to London. This new Production will be the first time our musical is fully-staged. It feels particularly special to be bringing Gibran and a piece of Lebanon back to the London stage, following the many difficulties faced by the Lebanese people over the past few years. We are so grateful to Katy for her longstanding support and belief in Broken Wings, and we can’t wait to welcome audiences early next year.”

Katy Lipson, also commented, “As soon as I heard this beautiful and arresting score I became committed to bringing this story to the stage in London in a full production. I find it a unique musical set in the melting pot of the Middle East but with a familiar story of longing, loss and discovery with an incredible writing team. I hope audiences will enjoy the romance and beauty of the story and enjoy another powerful new musical which deserves to part of the cannon.”

New York City, 1923. Through exquisite poetry and enchanting music, an ageing Gibran narrates our tale, transporting us back two decades and across continents, to turn-of-the-century Beirut. Gibran meets Selma; their connection is instant and their love affair, fated. However, their journey to happiness is soon thrown off course, as the pair face obstacles that shake the delicate foundation of their partnership. Will their love win out or will their dream of a life together be torn apart?

Performed in-the-round, Broken Wings takes us on an unmissable musical voyage, exploring issues of gender equality, immigration, the freedom to love who we love, and what ‘home’ really means to us. Over a century later, and the themes and debates raised in Gibran’s story, remain increasingly relevant today.