A one night only special concert 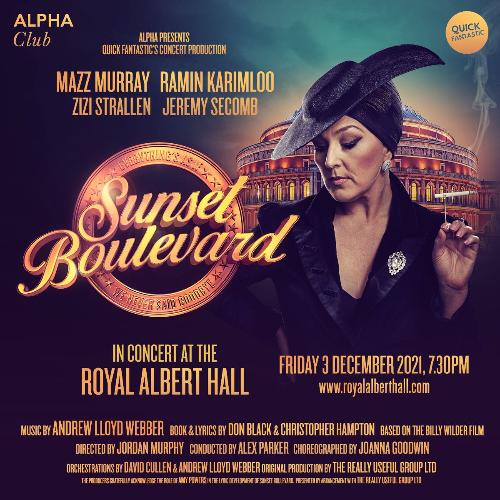 Based on Billy Wilder’s legendary 1950 film starring Gloria Swanson, Sunset Boulevard is heading to the Royal Albert Hall following a critically acclaimed performance at Alexandra Palace earlier this year. The 19-strong cast will be accompanied by a 40-piece orchestra on the evening, conducted by Alex Parker. Sunset Boulevard is directed by Jordan Murphy, with music by Andrew Lloyd Webber, lyrics by Christopher Hampton and Don Black, orchestrations by David Cullen and Andrew Lloyd Webber, choreography by Joanna Goodwin and sound design by Paul Smith.

Named after the famous Hollywood street, Sunset Boulevard follows silent film star Nora Desmond as she dreams of a triumphant return to the silver screen, and struggling screenwriter Joe Gillis who is drawn into her sinister fantasy world.

Conductor Alex Parker comments, Following our one-off performance at Alexandra Palace earlier this year, our concert production of Sunset Boulevard is now back bigger and better than ever, taking over the Royal Albert Hall. This timeless classic delights audiences with well-known incredible numbers including As If We Never Said Goodbye, With One Look and The Perfect Year.