The show is back 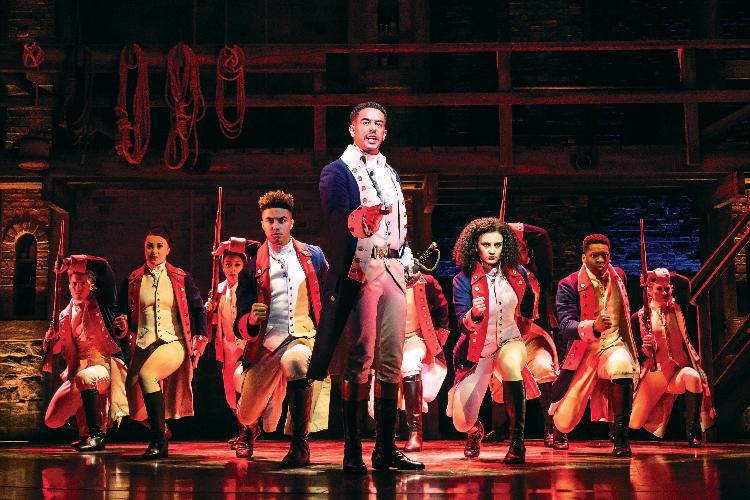 The piece will play from 19 August at the Victoria Palace in London, telling the story of the US Founding Fathers.

Karl Queensborough’s previous theatre credits include White Teeth at the Kiln Theatre, Sylvia and The Girl From the North Country at The Old Vic, The Little Matchgirl for Shakespeare's Globe/Bristol Old Vic/UK Tour, Aladdin, Cinderella, Dick Whittington and Jack and the Beanstalk for the Lyric Hammersmith, A Midsummer Night’s Dream for Filter, The Machine Stops for Theatre Royal York/Pilot Theatre, A Wolf in Snakeskin Shoes for the Tricycle Theatre, Only the Brave  for Soho Theatre/Wales Millennium Centre/Bird Song, Morning for the Lyric Hammersmith/Traverse Theatre, Dayglo and Mind The Gap for Y Touring and Ignition Out of Reach for Frantic Assembly.

Simon-Anthony Rhoden’s theatre credits include The Color Purple for Leicester Curve, Kinky Boots at the Adelphi Theatre for which he won the Broadway World UK Award for Best Long-Running West End Show Performer, If I Should Stay for Soho Theatre and Parade at the Edinburgh Fringe.  His screen credits include Feel Good, Let It Snow and Blue.

Ava Brennan’s theatre credits include Tina – The Tina Turner Musical at the Aldwych, A Christmas Carol for The Old Vic, the West End and UK tour productions of The Lion King, The Count of Monte Cristo and Hairspray in St Gallen Switzerland and the German tour of Aida. Her film credits include Hellboy, Rocketman, Mamma Mia! Here We Go Again and Beauty and the Beast.

Sharon Rose’s previous theatre credits include Beautiful: The Carole King Musical at the Aldwych Theatre, Motown The Musical at the Shaftesbury Theatre and Caroline or Change at the Hampstead Theatre.

Trevor Dion Nicholas originated the role of Genie in the West End production of Disney’s Aladdin at the Prince Edward Theatre.  He also played the role at the New Amsterdam Theatre on Broadway and the U.S Tour.  His other theatre credits include The Wiz, The 25th Annual Putnam County Spelling Bee, Ragtime, The Little Mermaid, The Wizard of Oz, Into the Woods, Little Shop of Horrors, Rent, The Exonerated and This is the Life All for the ETA Hoffman Theatre, Germany.

Waylon Jacobs makes his return to London production of Hamilton. His previous theatre credits include Treason for the Cadogan Hall, The Last Five Years for the Minack Theatre, Peter Pan for the Barn Theatre, YANK! at the Charing Cross Theatre, Chicago at the Phoenix Theatre, Memphis at the Shaftesbury Theatre, We Will Rock You at the Dominion Theatre and on tour, Rent at the Tabard Theatre, Ragtime and A Midsummer Night’s Dream at Regent’s Park Open Air Theatre, Children of Eden at the Prince of Wales Theatre and The Lion King at the Lyceum Theatre.

Emile Ruddock’s previous theatre credits include Me and My Girl at the Chichester Festival Theatre, Five Guys Named Moe at the Marble Arch Theatre, Crazy for You at the Watermill Theatre, Kiss Me Kate on UK Tour and The Scottsboro Boys at the Young Vic and at the Garrick Theatre.

Khalid Daley is making his West End debut. His theatre credits include Dick Whittington and War Horse for the National Theatre, Beautiful: The Carole King Musical on UK and Ireland tour, Hamlet on UK tour for Changeling Theatre, Careen – The True History of Bonnie and Clyde at Birmingham Rep, Godspell at the Edinburgh Fringe Festival and Lord of the Flies for New Adventures and Birmingham Hippodrome. His television credits include Doctors and 4 O’Clock Club: Hollywood.

Emilie Louise Israel is making her West End debut in Hamilton.  Her previous theatre credits include Nala in The Lion King and Jungle Festival for Disneyland Paris, The Woman in the US Tour of Gobsmacked! and the UK Tour of The Magic of Motown.

Harry Hepple’s theatre credits include Romantics Anonymous at Bristol Old Vic, A Taste of Honey, Follies and Burnt by the Sun for the National Theatre, The Lightening Child and Macbeth for Shakespeare’s Globe, Privates on Parade at the Noël Coward Theatre, A Midsummer Night’s Dream at Regent’s Park Open Air Theatre, Pippin at the Menier Chocolate Factory, Hot Mess at the Arcola Theatre, 25th Annual Putnam County Spelling Bee at the Donmar Warehouse, Been So Long for the Young Vic and Alaska for the Royal Court. His film credits include Peterloo and Stan and Ollie.  On television his credits include Moving On, Boy Meet Girl, Hustle, Misfits and Inspector George Gently.

Nuno Queimado’s previous theatre credits include Jesus Christ Superstar at Regent’s Park Open Air Theatre, Mother Courage and her Children and Side Show for Southwark Playhouse, From Here To Eternity at the Shaftesbury Theatre, Women on the Verge of a Nervous Breakdown at the Playhouse Theatre, The World’s Greatest Show for the Royal Opera House, God’s Garden UK tour, and The Little Match Girl at Sadlers wells. He also appeared in the ITV drama Cold Feet.

HAMILTON has book, music and lyrics by Lin-Manuel Miranda, is directed by Thomas Kail, with choreography by Andy Blankenbuehler, musical supervision and orchestrations by Alex Lacamoire and is based on Ron Chernow’s biography of Alexander Hamilton.  HAMILTON features scenic design by David Korins, costume design by Paul Tazewell, lighting design by Howell Binkley, sound design by Nevin Steinberg and hair and wig design by Charles G. LaPointe.

The Olivier, Tony and Grammy award-winning production opened at the newly re-built and restored Victoria Palace Theatre in London in December 2017 and continued to play there until the start of lockdown in March last year.

Obtaining Government-backed contingency insurance to protect against further unscheduled closures remains a priority.  All plans for the re-opening of HAMILTON are in accordance with the Government’s latest directives and therefore subject to change.