The Garden Theatre Returns with a new festival 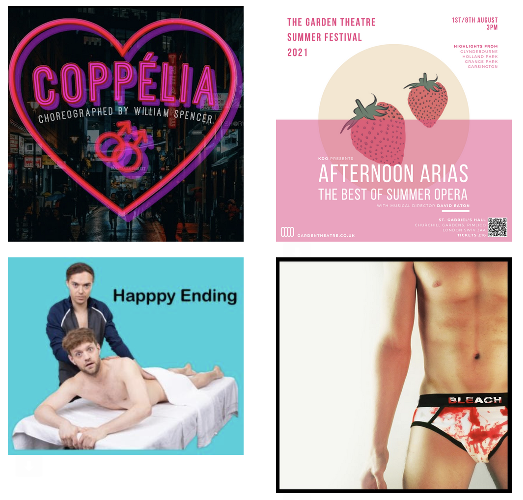 Following last year’s pop-up season in Vauxhall, The Garden Theatre returns this summer with a festival of exciting and eclectic work running from August 1 to 14 in a new pop-up theatre at St. Gabriel’s Halls in Pimlico.

Headlining the season is a sexy all-male modern ballet based on Delibes’ classic Coppelia, which is partnered with a new piece to the music of Tchaikovsky, The Supermarket Suite.

Coppelia  has Offie-nominated choreography by William Spencer, who will also premiere his new short work The Supermarket Suite in an exciting evening of narrative theatre dance inspired by the music of ‘The Nutcracker’, focusing on the everyday comedy we find in our lives.

Also running at The Garden Theatre will be Bleach and Happy Ending.

In Bleach, Tyler Everett knows how to take it like a man; he’s made a career out of it. He’s rejected London’s corporate world in favour of screwing his way through the city each night. Up to now he’s been doing pretty well for himself, enjoying a hedonistic life of men, sex and money. But on a fully-booked Saturday night, Tyler’s bubble’s about to burst and he’ll discover the real cost of living in the world’s most exciting city.

Written and performed by Dan Ireland-Reeves, Bleach is multi award nominated and was the Winner of the Write for the Stage award for Best New Writing 2017.

Happy Ending introduces you to a simple, perfectly professional massage therapist who goes about his day job never knowing who his next client might be. When a new customer walks in the door – full of conflicting signals, hidden agendas and forbidden topics – all of the job’s usual decorum goes out the window. Watch as rules get broken, skin gets bared, the truth gets twisted and things get steamy in playwright Ronnie Larsen’s sexy two-character play.

Finally, Afternoon Arias, curated and accompanied live on piano by David Eaton, allows audiences to sip bubbles whilst enjoying beautiful voices sharing an assortment of sumptuous and rousing arias, this is bound to be a summer treat for opera connoisseurs and live music lovers alike.