Jersey Boys back to the West End - News 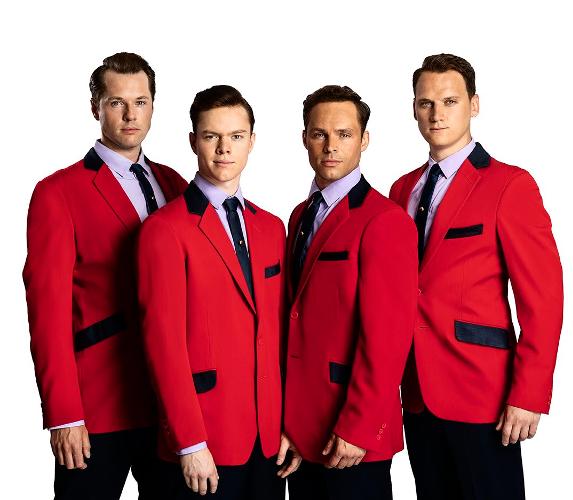 The producers and creative team are delighted to announce their new, young, dynamic cast for the highly anticipated return of this most beloved Tony, Grammy and Olivier Award-winning smash hit musical JERSEY BOYS.  It will be led by Ben Joyce as Frankie Valli, Adam Bailey as Bob Gaudio, Benjamin Yates as Tommy De Vito and Karl James Wilson as Nick Massi.  The musical will open at the new multi-million pound reinstated Trafalgar Theatre on 10 August 2021, following previews from 28 July.

JERSEY BOYS is written by Marshall Brickman & Rick Elice, with music by Bob Gaudio and lyrics by Bob Crewe.

Ben Joyce, having graduated from drama school this year, will be making his professional stage debut as Frankie Valli.  The creatives were very excited when this young talent was discovered during the extensive casting process and are looking forward to introducing him to the JERSEY BOYS audience.  Adam Bailey made his West End debut in The Book of Mormon and played Felicia/Adam in the National Tour of Priscilla, Queen of the Desert.  Benjamin Yates played and covered Fiyero in the UK & Ireland tour of Wicked.  He also played Mungojerrie in Cats at the London Palladium and most recently played Doug/Mr Spencer in The School of Rock at the Gillian Lynne Theatre.  Karl James Wilson played the role of Johnny Castle in the UK Tour of Dirty Dancing. Theatre credits also include the UK Tours of Jersey Boys and White Christmas.  Karl appeared in Hollyoaks playing the role of Wardy.

Go behind the music and inside the story of Frankie Valli and The Four Seasons in the Tony and Olivier Award-winning, true-life phenomenon, JERSEY BOYS. They were just four guys from New Jersey, until they sang their very first note. They had a sound nobody had ever heard… and the radio just couldn’t get enough of. But while their harmonies were perfect onstage, off stage it was a very different story—a story that has made them an international sensation all over again. From the streets of New Jersey to the Rock and Roll Hall of Fame, this is the musical that’s too good to be true.  The show is packed with their hits, including Beggin’, Sherry, Walk Like A Man, December, 1963 (Oh What a Night), Big Girls Don’t Cry, My Eyes Adored You, Let’s Hang On (To What We’ve Got), Bye Bye Baby, Can’t Take My Eyes Off You, Working My Way Back to You, Fallen Angel, Rag Doll and Who Loves You.

Recipient of Broadway’s Tony, London’s Olivier and Australia’s Helpmann Awards for Best New Musical, JERSEY BOYS is the winner of 65 major awards and has been seen by over 27 million people worldwide.

JERSEY BOYS returned to New York with a new production in November 2017 and will resume performances when Broadway returns this autumn. The JERSEY BOYS US National Tour is still breaking house records in cities across North America.

JERSEY BOYS at the Trafalgar Theatre will be staged by the original Broadway creative team, led by the Tony Award-winning team of director Des McAnuff and choreographer Sergio Trujillo, with scenic design by Klara Zieglerova, costume design by Jess Goldstein, lighting by Howell Binkley, sound by Steve Canyon Kennedy and projections design by Michael Clark.  The orchestrations are by Steve Orich and the music supervision and vocal arrangements by Ron Melrose.

JERSEY BOYS is produced in London by the Dodgers and Trafalgar Theatre Productions, with BB Investments, Kevin Kinsella, Pelican Group in association with Latitude Link and Eilene Davidson Productions