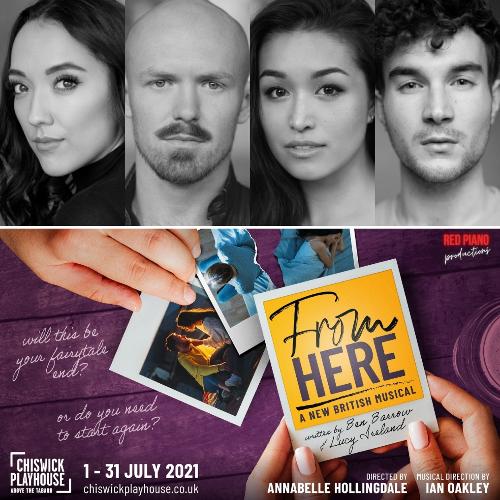 Grace Mouat (Six) and Andrew Patrick-Walker (Bat Out of Hell) will lead the cast of From Here: A New British Musical at Chiswick Playhouse, it has been announced.

They’ll be joined by Nicola Espallardo (Les Misérables), and Aidan Harkins (The Pirate Queen). This incredible world premiere considers where we might just find ourselves in five years.

From Here: A New British Musical is a new musical from Ben Barrow and Lucy Ireland. With four performers bringing to life the often musically-interwoven stories of several characters, the show asks the question of whether we are driven by the notion of a fairy-tale ending to our lives or are we constantly looking for something new. Finding love, marriage, family, are these the milestones we should strive for… or is there something else that we’re missing?

This funny, heart-warming and reaffirming show is produced by Dominic Gray for Red Piano Productions in association with the Chiswick Playhouse. From Here will be directed by Annabelle Hollingdale (Resident Director, Spring Awakening, The Hope Mill Theatre; Assistant Director, Heathers, The Other Palace) with musical direction by Ian Oakley. Set and costume design will be by Jessica Staton, with sound design by Tony Gayle.

From Here – A New British Musical will play the Chiswick Playhouse, running from 1st – 31st July 2021, with tickets on sale now.