The largest theatre since 1976 is coming to London - News

The 1,575 seat-venue will be built in West London 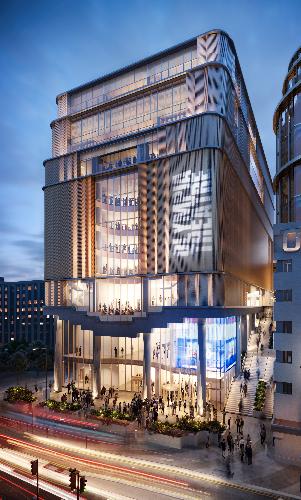 Yoo Capital and Deutsche Finance International (DFI) – developers of the £1.3 billion regeneration of Olympia as a world-leading cultural destination – announce a major agreement with premium international live entertainment business, Trafalgar Entertainment, to run the site’s new 1,575-seat theatre. The theatre will be the largest new permanent theatre build of its kind to open in London since the National Theatre in 1976.

The Olympia theatre agreement is part of a broader ambition by Trafalgar Entertainment to create a venue of national stature as the UK emerges into a new era. Like its neighbour, the Royal Albert Hall, it is set to become an iconic venue for the 21st century. Trafalgar has long recognised the transformational power of culture in making great places, with the nation’s flagship venues an integral part of the new vibrancy and civic self-confidence of towns and cities.

The expectations of modern audiences have also been anticipated; with a stacked auditorium design meaning every comfortable seat will feel close to the stage, and audiences can additionally enjoy the highest standards of ventilation throughout the theatre.  Spacious, glazed front-of-house areas offer far-reaching views across London, making a visit to the theatre a uniquely memorable experience. Visitors will enjoy top class bar, hospitality and VIP facilities, reinforcing the central role of this new landmark theatre in anchoring the wider Olympia redevelopment.

Currently under construction, the Olympia Theatre is scheduled to open in mid-late 2025. Trafalgar Entertainment’s lease runs for 35 years, with an option to extend for a further 35. They join luxury lifestyle and entertainment brands AEG Presents, Hyatt and citizenM as anchor tenants of the new, 14-acre Olympia redevelopment.

Trafalgar Entertainment beat off strong competition to lease the theatre. Leading theatre entrepreneurs and Joint CEOs of Trafalgar Entertainment, Sir Howard Panter and Dame Rosemary Squire are at the forefront of the UK’s cultural recovery.  They founded Ambassador Theatre Group from scratch and built it into the world’s largest live theatre company while running the company for 25 successful years. Their latest venture - Trafalgar Entertainment - is a leading force behind major theatre investment in the UK and internationally.

The Olympia agreement comes at a crucial time for the UK’s £100 billion p/y valued creative industries.  It is a strong show of investor confidence in the cultural sector as it recovers from the sweeping economic effects of the pandemic which closed most venues for over a year. Trafalgar Entertainment has shown no signs of slowing down, and is continuing its global expansion into Asia Pacific, with expectations to move into the US market in the coming year.

Chairman of Yoo Capital, John Hitchcox, said: “Sir Howard Panter and Dame Rosemary Squire have a unique track record in exceptional live entertainment and we are delighted to welcome Trafalgar Entertainment as the latest tenants of Olympia. Our vision is to create a new cultural hub in West London and we are looking forward to opening the largest new permanent theatre in the city for 45 years. This will be a big boost for the city’s entertainment industry and the local economy, providing the very best productions for theatre lovers and heralding a new era for theatre and entertainment in London.”

Co-founder of Trafalgar Entertainment, Howard Panter, said: “Looking forward to a new golden age of theatre, Olympia presents a once-in-a-generation opportunity – it is quite simply one of the most exciting new theatres London has seen for many years and we’re delighted to be playing our part as operator. Trafalgar Entertainment is determined to help the return of live entertainment across the UK: we know that audiences want passionately to return to the unique magic that is live theatre. Next month, our remodelled Trafalgar Theatre will open in the West End, Anything Goes plays a summer season at the Barbican, and we’re launching UK tours of The King and I and The Rocky Horror Show. With HQ Theatres opening new productions across the UK in coming months, and the Theatre Royal Sydney in Australia opening its doors for the first time in five years, we’re seeing the mighty strength of the theatre sector as investors and audiences come together to give the people what they want - brilliant world class theatre.”

Cllr Andrew Jones, Hammersmith & Fulham Cabinet Member for the Economy, said:  “Our ambitious Industrial Strategy has helped attract the largest new permanent theatre to be built in London in more than 40 years, creating new jobs for local residents and giving local young people more opportunities in the arts. The iconic Olympia London venue is a vital part of our mission to make Hammersmith & Fulham a global hotspot in culture, STEM (Science, technology, engineering and maths) and creative industries. We’re working with our vibrant theatres, concert halls and art galleries to turn H&F into a go-to destination.”

Gavin Neilan, Co-Founder and Co-Managing Partner of DFI, added: “Olympia is a hugely important and iconic venue which has a rich and successful 130-year history, as well as tremendous untapped potential.  Our vision is to truly unlock that potential by creating a vibrant new cultural, leisure and business hub for London, where visitors and office workers can enjoy a diverse spectrum of exceptional experiences and companies can showcase their products.  The number of exciting and high profile occupiers already signed up, and notably, the addition today of Trafalgar as the theatre operator, provide a clear demonstration that our vision to make Olympia’s next 130 years even more successful than its first, is shared.

The £1.3 billion Olympia redevelopment project will create a new cultural hub in west London. Yoo Capital and DFI are also in advanced talks with other potential occupiers with strong interest being shown for the development’s four-screen arthouse cinema, restaurants, shops, cafés and 550,000 sq ft of office and co-working space. The Heatherwick Studio and SPPARC-designed project will also see the enhancement of the existing exhibition halls and 2.5 acres of new public space created.

CBRE and Cushman & Wakefield are joint advisors on the leasing. The Olympia redevelopment is due to open in 2024.