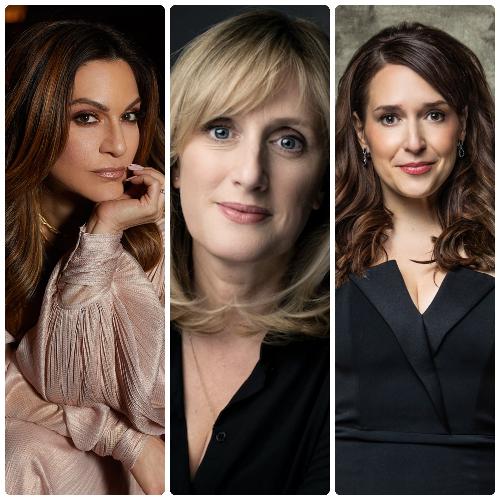 Each performer will headline their own solo concert events, with Olivier Award winning and Tony Award nominated Jenna Russell (Piaf, Sunday in the Park with George) taking to the stage on 7 November 2021, Shoshana Bean (Wicked, Waitress) on 4 December 2021 and Jessica Vosk (Finding Neverland, Wicked) on 27 February 2022.

Jenna Russell is an Olivier-Award-winning and Tony-Award-nominated actress. Her recent theatre credits include ‘Piaf’ in “Piaf” at the Nottingham Playhouse and Leeds Playhouse and “Celebrating Sondheim” at the Chichester Festival Theatre. Jenna’s other notable theatrical performances include ‘Sarah Brown’ in “Guys and Dolls” at the Piccadilly Theatre, ‘Dot’ in “Sunday In The Park With George” at the Wyndham’s Theatre and ‘Helen’ in “Fun Home” at the Young Vic. Her television appearances include the BBC’s “Born and Bred”, “Call the Midwife”, “Death in Paradise” and “EastEnders” and ITV’s “Midsomer Murders” and “Home To Roost” as well as being the performer of the theme tune to the sit-com “Red Dwarf”.

Shoshana Bean’s three solo albums have all topped the iTunes R&B and Blues charts in the US and UK, with her fourth and most recent project, “Spectrum” debuting at number one on the Billboard Jazz charts. She has sold out solo concerts around the globe and performed alongside the likes of Ariana Grande, David Foster, Postmodern Jukebox, Brian McKnight and Michael Jackson. She is a veteran of the Broadway stage and is perhaps best known for her portrayal of ‘Elphaba’ in the Broadway production of “Wicked”. Other prominent performances include ‘Shelley’ in the Tony-Award-winning production of “Hairspray” and ‘Jenna’ in the Broadway production of “Waitress. She won a IRNE Award for her performance as “Fanny Brice” in Funny Girl and earned a Jeff Award nomination for her portrayal of “CeeCee Bloom” in the pre-Broadway musical production of Beaches. This solo show, “Sing Your Hallelujah” is produced by For The Record Live and presented by Fourth Wall Live. David Cook serves as Music Director.

Jessica Vosk made her Broadway debut in the 2014 production of “The Bridges of Madison County” before going on to appear in the original Broadway cast of “Finding Neverland”. Her other notable credits include playing ‘Elphaba’ in the Broadway and United States touring productions of “Wicked” as well as playing ‘Fruma Sarah’ in the 2015 Broadway revival of “Fiddler on the Roof”. In 2018 Jessica released her widely acclaimed debut album titled “Wild and Free” with a follow up EP released in December 2020.