A new trailer has been released 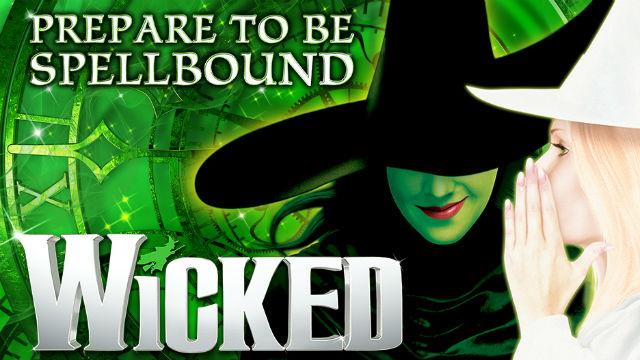 Wicked, the West End and Broadway musical phenomenon that tells the incredible untold story of the Witches of Oz, will return to London’s Apollo Victoria Theatre later this year, with performances resuming on Wednesday 15 September 2021.

Tickets for this booking period, which runs through to Sunday 22 May 2022, go on sale at 10am on Monday 17 May 2021. Wicked will play a Tuesday-Sunday performance schedule, with matinees on Wednesday, Saturday and Sunday. Visit www.WickedTheMusical.co.uk for all information.

Wicked will mark its 15th anniversary at the Apollo Victoria Theatre later in the year and will host a celebratory performance on Tuesday 28 September 2021.

The music and lyrics in Wicked are by the legendary composer Stephen Schwartz (whose enduringly popular musical Godspell celebrates its 50th Anniversary on 17 May 2021), with a book by Winnie Holzman (creator of the landmark American television series My So-Called Life). It is based on Gregory Maguire’s multi-million-copy bestseller, Wicked: The Life and Times of the Wicked Witch of the West.

The American author wrote his novel whilst resident in London in 1990. Against the backdrop of the emergent Gulf War, Maguire’s story began to take shape as he examined the fundamental nature of good vs evil - exploring how the impact of politics, history and circumstance came to affect the choices - and stories - of the characters we believed we knew so well.

The first of the four novels in the ‘Wicked Years’ series (and Maguire’s first novel for adults) challenged readers to look at the beloved ‘Wizard of Oz’ tale again and consider that all may not be as it first seems. Now firmly established as a commentary on our times, a special 25th Anniversary commemorative edition was published last October in a time of pandemic and divisive politics, both in the UK and USA, with an updated Afterword from the writer.

Gregory Maguire, author of Wicked: The Life and Times of the Wicked Witch of the West said today:

“While my novel is a quarter-century old, it has proven to be able to fly the distance. Every time Elphaba's story is read - or seen on stage - or sung - something can change within us. Since no day dawns free of heartache, a story about facing down the dragons outside and inside one’s self remains timely. The costs of courage are steep - and worth paying”.

Wicked imagines a beguiling backstory and future possibilities to the lives of L. Frank Baum’s beloved characters from The Wonderful Wizard of Oz and reveals the decisions and events that shape the destinies of two unlikely university friends on their journey to becoming Glinda The Good and the Wicked Witch of the West.

Soon to celebrate its 15th Anniversary in the West End, the iconic musical has already been seen by over 10 million people in London alone and played almost 6000 performances. Winner of over 100 major international awards, including three Tony Awards, two Olivier Awards, a Grammy Award and ten theatregoer-voted WhatsOnStage Awards (including three for ‘Best West End Show’), Wicked is already the 9th longest-running West End musical of all time.

“Stephen Schwartz and Winnie Holzman’s wondrous musical version of Gregory Maguire’s darkly brilliant fable is an allegory for, and of, our times. After the challenging year faced by everyone in our company, we are grateful to them for their resilience and patience and delighted that we can at last get back to telling this extraordinary story again. We look forward to audiences returning to Oz and to creating more unforgettable memories for everyone.”

The huge and enduring success of Wicked in London has seen the musical become a fundamental component in the cultural ecology of Victoria, playing a pivotal role in the health of the area’s leisure and hospitality landscape. Wicked draws in audiences from across the UK (as well as internationally) and helps to ensure Victoria remains an outstanding cultural destination.

“This is more good news for London and signals how life is gradually returning to Victoria after many months of lockdown. By the summer, we can expect more workers to be returning to offices, and it is vital that our rich cultural, hospitality and retail offering is thriving and ready to welcome people back. Wicked is an iconic fixture in Victoria, and the reopening plans announced today will further galvanise both the economic renaissance and vibrancy of the area”.

Through its For Good charitable programme, the production’s fundraising endeavours have to date resulted in the planting of over 50,000 new trees at the Woodland Trust’s Heartwood Forest, now England’s largest continuous new native forest. Long-standing collaborations with the Anti-Bullying Alliance and the National Literacy Trust are also set to continue.

The full cast will be confirmed at a later date.

Wicked has music and lyrics by multi-Oscar, Golden Globe and Grammy Award winner Stephen Schwartz (Godspell, Pippin, The Prince of Egypt; Disney’s Pocahontas, The Hunchback of Notre Dame and Enchanted) and is based on the novel Wicked: The Life and Times of the Wicked Witch of the West by Gregory Maguire and adapted for the stage by Winnie Holzman. Musical staging is by Tony Award-winner Wayne Cilento with direction by two-time Tony Award-winner Joe Mantello.