My Son’s A Queer But What Can You Do - News

The premiere of the show will run at the Turbine theatre 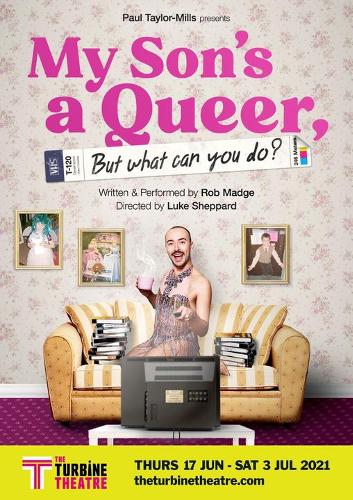 The world premiere of Rob Madge’s My Son’s A Queer But What Can You Do? is coming to the Turbine Theatre this June, it has been announced.

My Son’s A Queer But What Can You Do?’ celebrates the joy and the chaos of raising a queer kid.

When Rob was 12, they attempted to stage a full-blown Disney parade in their house for their Grandma. As Rob donned a wig and played Mary Poppins, Ariel, Mickey Mouse and Belle, their Dad doubled as Stage Manager, Sound Technician and Goofy. Unfortunately, Dad missed all his cues and pushed all the floats in the wrong direction. Mum mistook Aladdin for Ursula. The costumes went awry. Ariel’s bubble gun didn’t even work properly. Grandma had a nice time though.

Join Rob as they delve into the archives of their old home videos in attempt to recreate this parade and celebrate the joy that can be discovered when parents champion the creativity and absurdity of their child.

Written & Performed by Rob Madge, their acting credits including Mary Poppins, Les Misérables, Matilda the Musical and Olivier!
Audiences will be socially distanced for the piece at the Battersea venue, with perspex screens dividing audience members.
My Son’s A Queer But What Can You Do? is directed by Luke Sheppard (& Juliet) and will play a limited run at The Turbine Theatre, running from 17th June – 3rd July 2021.