A "passport" to go to the theatre? 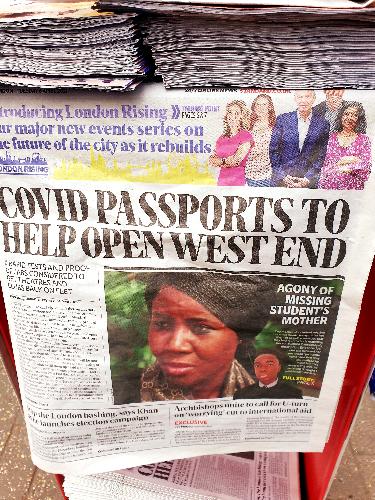 Ministers are looking at how rapid tests and proof of vaccination could allow big shows to reopen in the West End, with auditoriums filled rather than nearly empty, has revealed the Evening Standard today.

The "Covid passport" would record whether people had been vaccinated, recently tested negative or had natural immunity, having already had a bout of coronavirus.

Improved ventilation and testing before and after events are among the other approaches being tested for mass gatherings and indoor events.

The NHS is said to be working on a system to allow people to demonstrate their Covid vaccination status through an app or paper certificate.

For people who have not yet been vaccinated, it could record any recent negative tests, or whether they have tested positive in the last six months and are likely to have natural immunity.

Pilots will take place from mid-April to trial the system at nine events, including Liverpool's Hot Water Comedy Club, the World Snooker Championship in Sheffield, Liverpool's Circus nightclub and the FA Cup semi-final and final at Wembley.